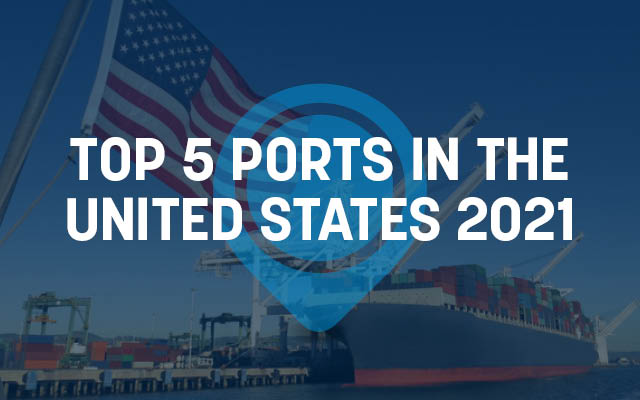 PTI is continuing with its lists of top ports across the world, counting down the busiest ports in the United States.

Following the ‘Top 10 Ports in China 2021’, now our focus turns to North America.

The US holds the largest economy in the world and is driven largely by its port’s operations. Over the last year, the country has experienced a massive surge in consumer demand, driven by the COVID-19 pandemic, clearly demonstrated in their container handling figures.

As figures for 2021 as a whole are yet to be released, we have used reports from the first ten months of the year. This give us a clear indication of what the final yearly figures will look like.

In recent news, the alliance has also voted to improve its environmental sustainability efforts by approving a $500,000 fund to support the use of Electric Yard Trucks in the Port of Tacoma.

4. The Port of Savannah

After a very successful October period in 2021, surpassing 504,000 TEU, the Port of Savannah is on its way to its highest yearly TEU handling figure on record.

By January 2022, the Georgia Ports Authority will open 670,000 TEU of increased capacity at the Garden City Terminal at the Port of Savannah to help cope with the increasing amount of demand. By early March 2022, 155,000 TEU of additional terminal capacity will be available, and by June 2022 another 850,000 TEU will come online at the port.

3. The Port of New York and New Jersey

The increase in consumer demand has also been seen at the Port of New York and New Jersey as it is currently experiencing a surge in volume.

In order for the port to be able to handle larger vessels, Liebherr Container Cranes Ltd. will supply the Maher Terminal with three new environmentally friendly Liebherr Megamax Ship-to-Shore (STS) container cranes. These cranes will add to the current fleet of eight Liebherr STSs already at the port.

2. The Port of Long Beach

Just shy of the top spot on our list, the Port of Long Beach has had a very busy year as the growth in consumer demand continues to drive container volumes.

The port’s second-busiest October ever was recorded this year, handling a total of 789,716 TEU, down 2.1% from the strongest October in 2020.

Long Beach is also the only port on this list to have released its November container handling figures at the time of writing this list. Through the month, the port processed 745,488 TEU, a decline of 4.9% compared to November 2020.

In the first 11 months of 2021, the port managed to handled over 8.6 million TEU, already surpassing the current annual record of 8.1 million set in 2020. By the end of the year, it is predicted handled over 9 million TEU.

The increase in consumer demand has led to mass congestion and long vessel delays, this led to many measures being introduced to help alleviate the pressure facing the port. One example saw the City of Long Beach temporarily waive enforcement of shipping container stacking and height limits at the port for a 90-day period.

1. The Port of Los Angeles

Reaching the top spot on our list is the Port of Los Angeles.

Just like the Port of Long Beach, consumer demand has driven Los Angeles’ container handling figures to new highs as in the first 10 months of the year, the port reached 9,079,561 TEU – an increase of 21.96% compared to the same period in 2020.

Congestion also affected the Port of Los Angeles’ operations, leading them to work with the Port of Long Beach on introducing a “Container Dwell Fee” that aimed to charge ocean carriers to long dwelling cargo.

While initially announced on 25 October, consideration of the fee has been delayed several times as both Los Angeles and Long Beach have seen a decline in ageing cargo on their docks.