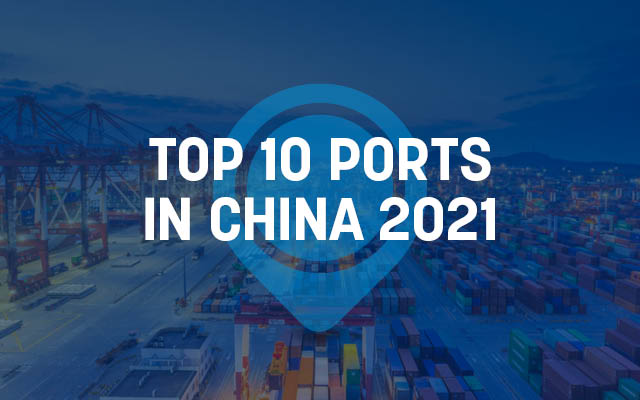 As the year draws to a close, PTI has taken on the task of counting down the top ten ports in China in 2021.

PTI is revitalising its series which gives the spotlight to the biggest and best-performing ports from across the world. Previously, we have counted down the Five Busiest Ports in Europe, the UK, and Southeast Asia.

While we are still awaiting the final figures from the Ningbo Shipping Exchange for the final two months of the year year, it is already clear to see that China has had a very productive 2021.

Chinese ports handled a total of 235.48 million TEU for the first ten months, period ending 30 October 2021. This demonstrates an increase of 8.4% compared to the same period in 2020.

With container handling figures for the year so far announced, it gives us a very clear idea of what ports will be leading the charge into 2022.

Lianyungang, located near the mouth of the Qiangwei River in the Northern Jiangsu province of China, has celebrated recent success with a 4% year-on-year increase in October, handling 4,180,000 TEU.

One of the drivers behind digitalisation at the port includes the implementation of Navis N4 TOS at its Lianyungang New Oriental International Terminals (LNOIT) back in 2019.

The Port of Rizhao has also seen recent success with growing container handling figures. The deep-water seaport on the coast of the city of Rizhao experienced an 8% year-on-year in container throughput in the first ten months of 2021.

Beibuwan Port, also known as Beibu Gulf Port, is a seaport in the Guangxi province of China owned by the Guangxi Beibu Gulf International Port Group.

In the first ten months of 2021, the port reached a total of 4,770,000 TEU in throughput, increasing a massive 18.6% compared to the same period the previous year. This also marks the largest year-on-year increase on this list.

Located along the Jiulongjiang River in southern Fujian, the Port of Xiamen is a very important deep-water port to the Chinese economy.

Handling a year-to-date total of 10 million TEU, the port saw a 6.4% increase in throughput through these first ten months.

Xiamen is just one of the ports also promoting the acceleration of innovation in China’s maritime sector. One such example of this can be seen in their signing of a ‘Comprehensive Strategic Cooperation Framework Agreement for Construction of World-Class Ports’ alongside the Tianjin Port Group in 2020.

The Port of Tianjin, the largest port in Northern China and main maritime gateway to the country’s capital, has seen the second-largest increase in containers through this period.

Tianjin is one of the ports in China heavily dedicated to making operations greener.

In August this year, the Tianjin Port Group announced it is to build the world’s first artificial intelligence (AI) zero-carbon terminal. The terminal is set to be located in Section C of the port and zero emissions is meant to be achieved through the construction of a green energy supply.

Staying in the same spot as in our original list of the top five ports in China, Qingdao Port continues to be the fifth busiest port in China.

Qingdao is an important hub for trade along the New Silk Road and this is arguably what drove Hong Kong-based shipping logistics company SITC International to inaugurate its Global Shipping Logistics Center near the port.

Also remaining in the same spot as in our original list is the Port of Guangzhou.

The Port of Guangzhou is the main seaport of the Guangzhou city in Guangdong province of China and managed to handle 19,920,000 TEU through the period, demonstrating a year-on-year increase of just shy of 5%.

In 2019, it was announced that this major port had signed a partnership agreement with one of the largest ports in Europe, the Port of Rotterdam. The agreement oversees collaboration between the two parties with them sharing expertise and best practices in the field of port management.

The Port of Shenzhen, previously the second-busiest port in the country, saw a 10.7% increase in containers through this year so far, reaching a total of 23,790,000 TEU.

The port is home to some of the biggest Chinese terminal operators including China Merchant Ports and Yantian International Container Terminals and has an annual transshipment capacity of around 18.91 million TEU.

Moving up from third place, the Port of Ningbo-Zhoushan is now the second-busiest port in China this year and also the third-busiest world.

Despite having to slow and suspend terminal operations in September due to Typhoon Chanthu, the Port of Ningbo-Zhoushan has solidified its place amongst the titans of the Chinese maritime sector with its consistent strong figures.

Topping our list of Chinese ports, the Port of Shanghai continues to dominate the country’s maritime efforts, while also beating the Port of Singapore in gaining the title of the busiest port in the world.

In July this year, the Shanghai International Port Group (SIPG) launched its smart command and control centre project, with support from its Shangdong Branch, ZeZha Technology, and Huawei. This project aims to make a major breakthrough in the operation of next-generation smart ports.