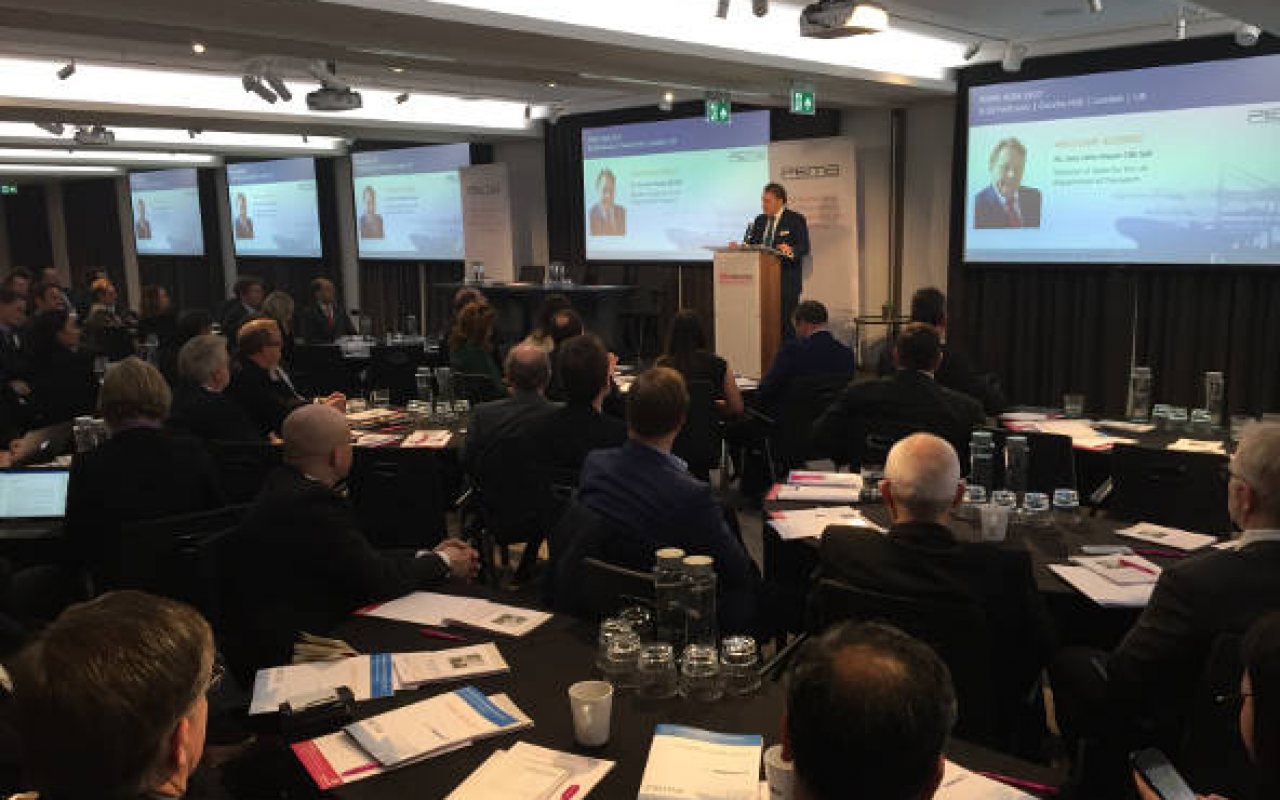 Members of the Port Equipment Manufacturers Association (PEMA) called for cross-industry dialogue to optimise the global shipping supply chain as large container vessels have been creating severe peaks and troughs in port activity.

Leading figures from the global ports and terminals sector raised concerns at the association’s annual general meeting over the increasing strain on local road and rail infrastructure, port equipment and manpower as shipping lines create operational efficiencies through larger ships and alliances.

The use of automation to help smooth the fluctuations in activity and level resources was also discussed, including ways to improve the interface between human operators and machinery.

Speakers urged the container shipping industry to reflect on optimal ship size, and customer expectations regarding delivery times, with the aim of strengthening the supply chain.

The recent spate of shipping alliances was discussed as critics see these as a distortion to the market, with mergers and acquisitions being regarded as a more effective way of reducing excess capacity in container shipping.

It was noted that such capacity sharing could emerge as an effective way for ports to improve efficiency and reduce costs.

Guest port operator speakers also highlighted the growing importance of safety, security and the need to reduce environmental impact in the face of growing regulatory requirements.

The operators called on PEMA members to engage with them to help improve safety and efficiency within ports; a message echoed by Capt. Richard Brough ICHCA International’s Technical Adviser.

Ottonel Popesco, PEMA’s President, said: “To function more effectively, port equipment manufacturers, ports and shippers need to establish an open dialogue in which challenges are tackled holistically. The industry needs a platform from which it can effect change and PEMA should be that platform.”

View Cavotec and Konecranes in the PTI Supplier Directory

Additionally, Michael Eckle (Conductix Wampler), and Achim Dries (Vahle) were elected to the PEMA Board following the termination of the mandates of Stephan Stiehler of SICK AG and Per-Anders Holmström, former President of Bromma Conquip, who were thanked for their contribution to PEMA over the last few years.

Popesco said: “PEMA is increasingly recognised in the global ports sector, and we want to build on that going forward.”

He indicated that PEMA had set a target of continued growth, with the aim of taking PEMA membership to more than 150 companies. PEMA started with eight members in 2004, and membership currently stands at 103 companies, including some of the biggest names in the port equipment sector.

Earlier, UK Minister for Transport, John Hayes CBE MP, delivered an upbeat opening address, during which he noted that people have travelled and traded throughout history.

“Transport changes lives because it changes life chances – from it we grow and learn. Travel is part of a continuum, something permanent,” Hayes said. Looking forward, he forecast an “era of investment” in port equipment, adding that “deep sea ports are ever more important.”

This was the first time that a UK government minister had addressed a PEMA event.

PEMA General Membership meetings are staged one-to-two times per year, including the Annual General Meeting in the first quarter of each year. The next Autumn Members meeting will be hosted by Kalmar in Tampere, Finland on October 10-12, 2017.