Khalifa Port: The Birth of a Giant 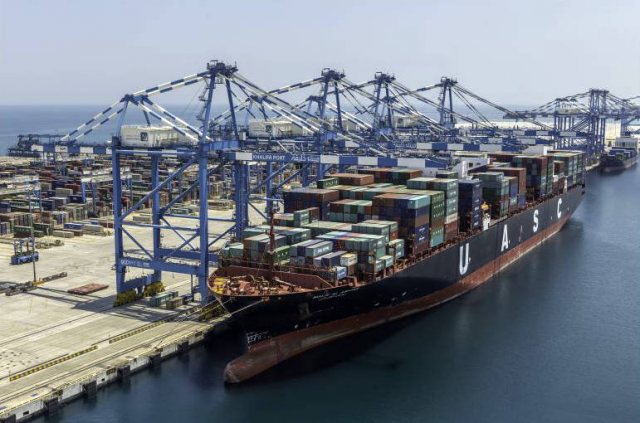 The background of the project

Khalifa Port is situated next to the Khalifa Industrial Zone Abu Dhabi (Kizad), a cornerstone of the Abu Dhabi Economic Vision 2030, an industrial development of massive scale, which is under construction and is intended to stretch over an extraordinary 417 square kilometers. It marks a substantial drive towards the diversification of the economy in pursuit of sustainable growth that becomes less dependent on oil and gas.

The Emirates invested considerably in order to attract worldclass industries. Global and local companies alike recognize outstanding market access, the low cost operating environment and the support services and facilities. Khalifa Port and Kizad are being developed to support this vision.

Just offshore from Khalifa Port and Kizad (the megaproject) lies the United Arab Emirates (UAE) and the Gulf ’s largest coral reef, the Ras Ghanada reef, 4 kilometers off shore and about 35 square kilometers in size. It supports coral such as Acropora downingi, Poritis Harrisoni, Acropora arabensis and flourishing marine life, such as turtles, dugongs, seasnakes, clownfish and much more. In order to protect the reef, an off shore terminal quay (the port island) was developed 4.6 kilometers out to the sea. Furthermore, 8 kilometers of internationally recognized and award-winning protective breakwater was constructed to help conserve the reef. The longest bridge in the UAE, to the port island, 1 kilometer long, allows for the current flow to the reef to be maintained.

It was in 2008 that construction of the port island began and the first dredger started to build bunds in the Gulf. In July 2010, ADPC started to write the equipment and TOS specifications; in  September 2010, the tendering for equipment started, and orders for six STS cranes, 30 ASC and 20 sprinter cranes (SCs) went out at the end of November 2010.

From 2012, Khalifa Port will be able to handle, if needed, 2 million TEU containers a year and 12 million tons of cargo capacity a year. By 2030, that figure is scheduled to rise to up to 15 million TEU containers and up to 35 million tons of cargo a year. In February 2012, 3 STS, 20 ACSs and 10 SCs had arrived in good shape and tests began. In the fourth quarter of 2012, the official opening of the megaproject will take place.

The infrastructural design is solid and designed for a long life and low maintenance costs. The STS cranes run on an A150 rail with a rail span of 35 meters. The landside rail is mounted on beam stands on concrete piles of 1.2 meter diameter, every 6 meters. The waterside QC rail lies in the centre of the capping beam; a concrete beam 2.8 meters thick and 12.7 meters wide, which is built on top of a concrete block wall.

There are 30 ASCs, in 15 stacks, run on a 350 meter long AS86 rail, which is fixed on a concrete beam. This massive beam (1.5 meters by 1.2 meters) is fixed on 0.8 meter diameter concrete piles, every 6 meters on average. In the stack, the containers stand on massive concrete transverse beams as well. In general, beams are 0.9 meters by 1.5 meters, but in areas of 45 foot containers the beams are 0.9 meters by 3.3 meters. In between the beams, the stack is paved with interlocking concrete blocks. The pavement on the terminal is a special concrete mix which is applied in different thicknesses, depending on its functionality.

Equipment for the project

The equipment specifications were made in a period of six weeks and the planning for the delivery of a working terminal was challenging. It was in this way, therefore, that the TOS became linked to the ASC supplier, as it has the strongest interface and risk. This is how the ASC supplier Konecranes became responsible for the delivery and implementation of ASCs and the Navis SPARCS N4 TOS system.