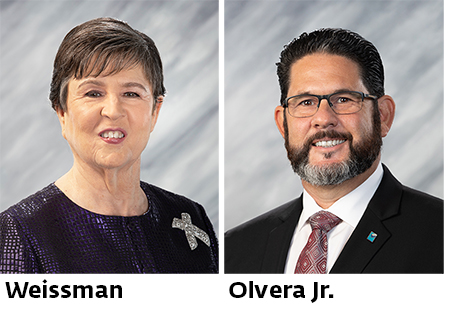 On 25 July the board also selected Bobby Olvera Jr. as Vice President and Bonnie Lowenthal as Secretary.

Every July, Commissioners select a President and two board officers to serve one-year terms.

The Commission’s new officers will begin their terms on 8 August, when outgoing Commission President Steven Neal will hand the gavel to Weissman at the Board’s regularly scheduled meeting that day.

Weissman served as a Senior Advisor to Mayor Robert Garcia from July 2014 and Transportation Deputy beginning in 2017 until her retirement in June 2020.

Appointed to the Harbor Commission in 2020, Weissman was elected as Vice President of the Board in July 2021.

“I am honoured by the trust my colleagues on the Board have placed in me,” Weissman said.

“In collaboration with my fellow Commissioners, Executive Director Mario Cordero, and staff, I look forward to navigating our way through the challenges of the supply chain, supporting the necessary infrastructure that will keep the Port competitive, and building upon the port’s robust green initiatives.”

Under the City Charter, the Board sets policy for the Port and directs the Port’s Executive Director, who leads about 550 employees in developing and promoting the Port of Long Beach.

The Port of Long Beach achieved its most active June and busiest quarter on record, boosted by increased consumer demand as retailers stock shelves for back-to-school shopping.