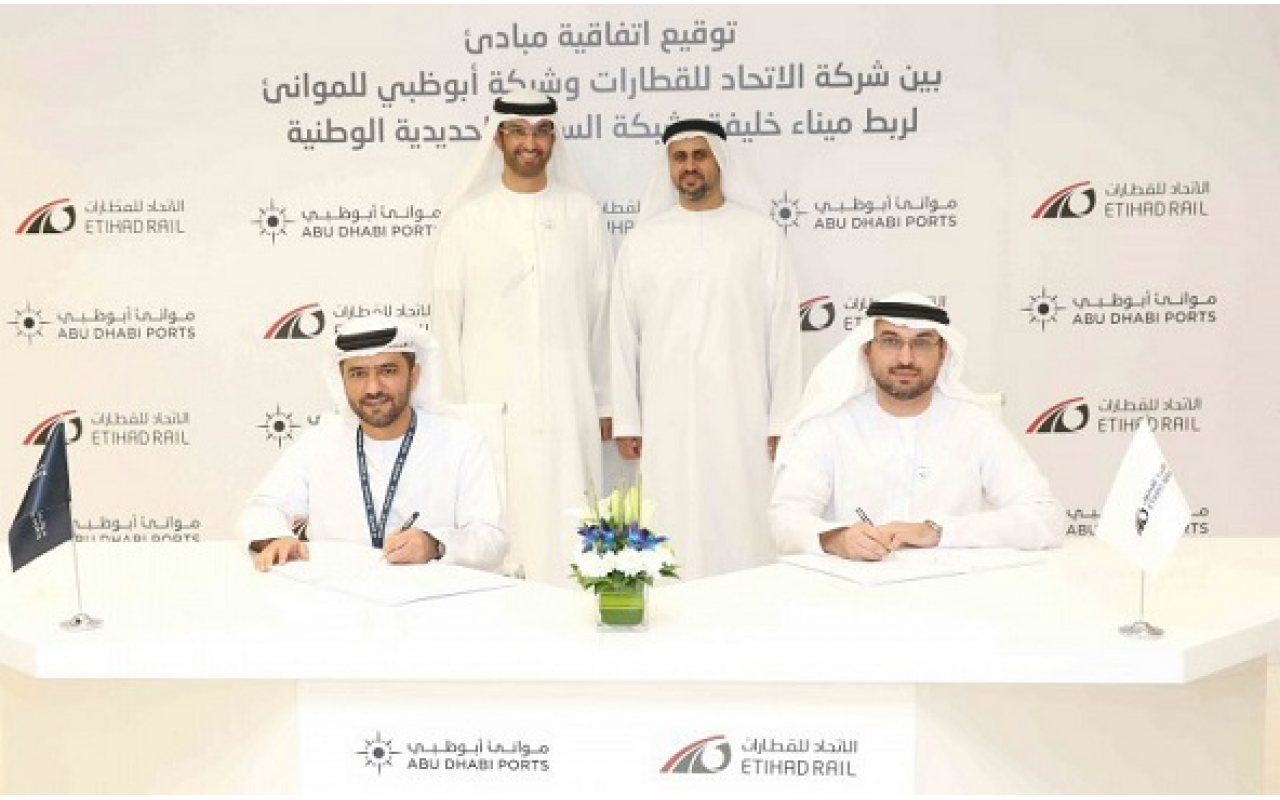 According to a statement, the agreement was formed after a visit by His Highness Sheikh Theyab bin Mohamed Al Nahyan, Chairman of Etihad Rail, to Khalifa Port, where he was briefed on work progress at the Khalifa Port Maritime Traffic Control Center.

This facility was established to ensure the safe navigation of vessels around ports in Abu Dhabi, and provides a number of services to facilitate easy access to, and departure from, territorial waters.

His Highness also attended a signing ceremony for the new agreement, which took place on February 18, 2019.

Speaking at the event, he commented: “The signing of the agreement will have a positive impact on many sectors of the national economy and society.

“Today, with more than half of the cargo going to and from the GCC entering and exiting through UAE ports, the link will significantly enhance the capacity of the port and strengthen the UAE’s position as a leading global logistics and commercial hub.”

Rail terminal capacity at Khalifa Port, which is currently being expanded, is expected to be the largest of its kind within the UAE, handling an annual throughput of 2.4 million TEU.

The chairman also said: “The Etihad Rail facility at Khalifa Port will enhance the efficiency of its infrastructure as well as the ability to increase its capacity in a more economical and reliable way.

“One train will have the ability to carry the load of 300 trucks. That is why it will be capable of providing competitive services and will create opportunities for businesses to gain an edge in key markets.”

Collaboration between parties, according to Abu Dhabi Ports, will provide customers such as shipping companies and logistics service providers with various benefits to boost efficiency and reduce costs.

The agreement also contributes to the second stage of Etihad Rail’s expansion project, with the company preparing to extend its network by 605 kilometres from Ghuweifa to Fujairah, passing through terminals at Khalifa Port, Jebel Ali and Khor Fakkan.

His Excellency Dr. Sultan Ahmed Al Jaber, Chairman of Abu Dhabi Ports, added: “This agreement represents a significant milestone to Abu Dhabi Ports and is in line with the company’s strategy and plans to actively contribute to the economic development process by establishing a sustainable and diversified economy based on innovation.

“With a strategic role to provide a fast and sustainable transport network as per highest standards of efficiency and safety, Etihad Rail National Railway is a quantum leap to streamline economic benefits for all commercial, industrial and logistics sectors.”