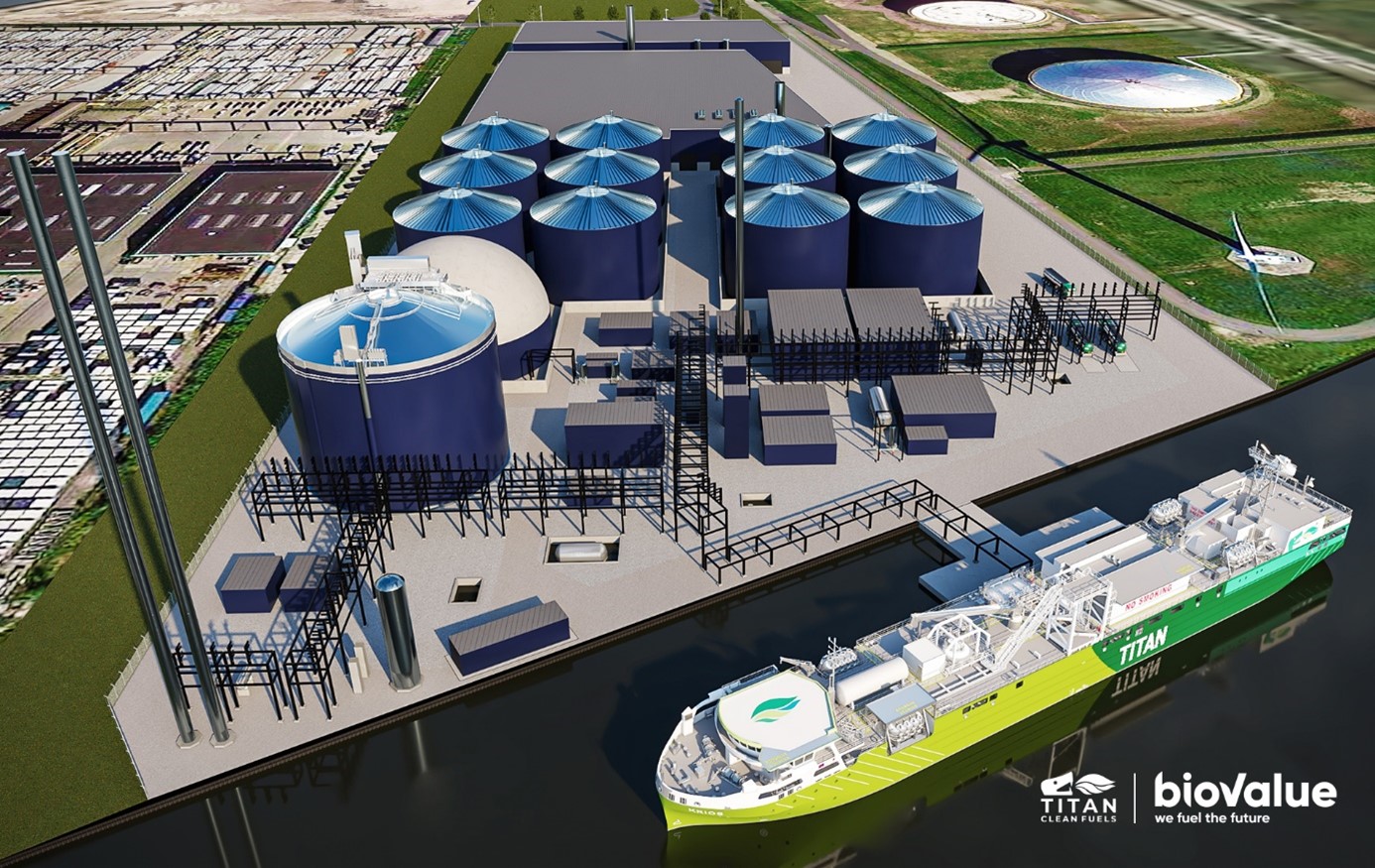 Fuel supplier Titan will build and operate the Liquified Biomethane (LBM, also known as bio-LNG) plant at the Port of Amsterdam.

Titan, the independent supplier of low and zero-carbon fuels, announced today its LBM production project for 200,000 tonnes of LBM per year.

Titan will build and operate the LBM plant at its strategic location in the Port of Amsterdam allowing supply to ships and trucks.

Two contracts have been signed: firstly with biogas producer BioValue for the exclusive off-take of all on-site produced biogas; and secondly with Linde Engineering to perform the basic engineering.

BioValue, one of the largest biogas suppliers in the Netherlands, will supply a significant part of the biogas required for the total LBM production.

BioValue will construct a new biogas plant, adjacent to the LBM plant.

The remaining biogas will be sourced from other production installations throughout Europe that are connected to the existing gas grid.

The bulk of the LBM volumes produced by the plant will be supplied to the LBM-powered vessels of Titan’s launching customer.

The LBM will substitute fossil fuels, avoiding about a million tonnes of CO2 equivalent emissions per year, equal to the annual emissions of about 25 per cent of all diesel cars in the Netherlands.

The plant will be located adjacent to Titan’s berth in the Port of Amsterdam, from whom the land will be leased.

The first LBM production is expected in 2025.

The project will only source biogas from sustainable feedstocks that are compliant with the latest EU Renewable Energy Directive, and are International Sustainability and Carbon Certification (ISCC) certified.

Other sustainable integrations in the plant include the capturing and utilisation of the biogenic CO2 side stream, and the hydrogen-ready design. This enables future production of e-methane where the biogenic CO2 is combined with green hydrogen.

Ronald van Selm, CTO at Titan, commented: “Titan is committed to decarbonise shipping by supplying LBM and any other renewable fuels such as hydrogen-derived methane, also known as E-LNG.

“Strategic value chain collaborations are paramount to ramping up alternative fuel production to the scale required for shipping. We are proud of the joint efforts with BioValue and look forward to a long-lasting partnership.”

Roon van Maanen, Director Energy & Circular Industry at Port of Amsterdam, said: “Having the energy transition, circular economy and clean shipping at the core of our sustainability strategy, Port of Amsterdam welcomes the novel renewable fuel plant with full support.

“We want to reduce emissions in our port area and lead the way in the transition to a sustainable society. This plant, with its hydrogen-ready design, is a perfect example that fits seamlessly with our long-term strategy for the port.”

In June the Ports of Amsterdam and Duisburg (duisport) signed a deal to expand their cooperation and jointly develop a hydrogen value chain and hinterland network.