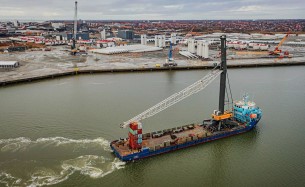 This was provided after an LHM 600 ordered by Port Esbjerg was damaged in the Kiel Canal, thereby suspending its delivery.

Service engineers and technical specialists were sent by Liebherr to assist with the recovery, before the replacement unit was provided to Port Esbjerg.

Area Manager for Liebherr Mobile Harbour Cranes, Roman Chopyk, said: “We have a long and cooperative relationship with the Port of Esbjerg. So it goes without saying that one of our top priorities after the incident was to deliver a new machine as quickly as possible.”

A new LHM 600 will also be delivered as soon as possible.

The first LHM 800 for Port Esbjerg was delivered in 2019 and it is the largest and most powerful mobile harbour crane in the Liebherr portfolio.

The high-rise-version allows the customer to lift project cargo up to a height of 92 metres and in a special heavy-lift version, the LHM 800 can lift loads of up to 308 tonnes.

The ever-increasing demand for mobile heavy-duty cranes in the maritime sector is met through the LHM 800, and a major force of this development is the wind industry.

The Port of Esbjerg now operates the seventh Liebherr mobile harbour crane as a result of the delivery of the second LHM 800. As a result, the port will be one of three ports in the world to have two LHM 800s in its fleet.

Tandem lifts of up to 616 tonnes are feasible with this machinery. Accordingly, even the parts of the upcoming generation of offshore wind turbines may be handled promptly and safely.

The Port of Esbjerg is a European leader in handling wind energy components and plays a key role in the Danish offshore wind industry.

Some 80 per cent of the offshore wind capacity installed in Europe was shipped from the Port of Esbjerg.