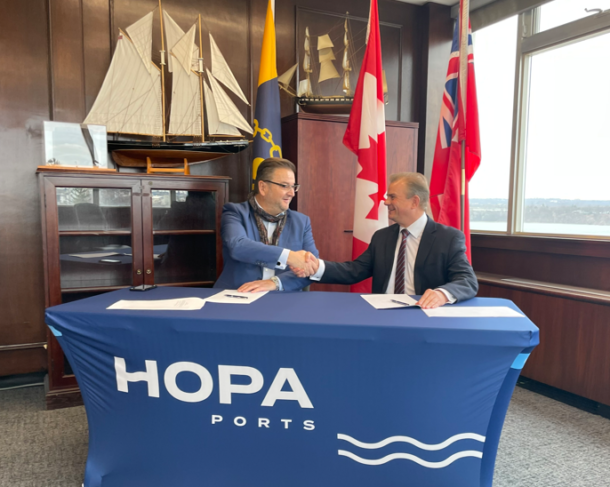 Hamilton-Oshawa Port Authority (HOPA) and Max Aicher North America (MANA) have announced the completion of a head lease which will enable greater investment and development on MANA’s Hamilton Bayfront property.

Since 2020, HOPA and MANA have collaborated on a variety of industrial uses for a 60-acre plot at Pier 18 in Hamilton Harbour.

The location is accessible by marine, rail, and road transportation, and is situated in the northeastern corner of Pier 18 in Hamilton’s Bayfront Industrial Area.

More than eight acres of warehouse buildings are included in the property, along with an open area for outdoor storage.

The area has been utilised by HOPA for a variety of industrial projects, including the assembly and staging of the Enwave deep-water cooling pipe as well as the storage and logistics of commodities.

In order to attract more high-value industrial activity, through its subsidiary, HOPA’s new head lease will allow the Port Authority to expand the necessary long-term investments.

MANA continues to retain ownership of the property under new management and they have been named one of Hamilton’s 40 fastest-growing companies.

User requirements will primarily drive specific investments, and the site’s multimodal assets are key to its value according to HOPA.

“It’s a magic combination that is extremely rare in southern Ontario, and we’re lucky to have it here in Hamilton, ready to go.”

HOPA Ports has a special expertise and an established track record of developing marine-served industrial spaces.

Over the last ten years, HOPA Ports has invested more than CA$350 million ($256 million) in the ports of Hamilton and Oshawa.

The facility is used for a variety of logistics tasks necessary for a flexible industrial supply chain, such as flexible storage of steel and manufacturing components, warehousing and rail transloading of materials for the construction and manufacturing industries, value-added processing, and others.

“Further investment in this site can help provide the space that is needed to support modern manufacturing in Ontario,” said MANA CEO, Walter Sommerer.

“Through our partnership with HOPA, MANA is reinforcing its commitment to Hamilton and the local economy.”