Future Visions interviews: Royal HaskoningDHV and the future of ports and terminals 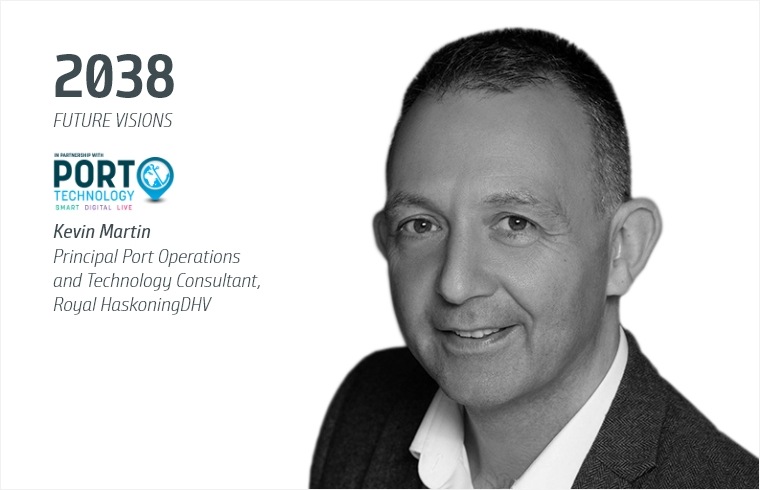 Royal HaskoningDHV recently spoke to Inform as part of the Future Visions interview series to discuss the port and terminal industry and some technology developments we can expect to see over the next two decades.

Kevin Martin, Principal Port Operations and Technology Consultant at Royal HaskoningDHV, discussed some of the most impactful technologies we will see.

“The ongoing development of technologies that underpin big data will have the most significant impact, and that concept will provide an incredible opportunity. I believe that ports are quite behind the curve in terms of using data to look at their operations and getting real benefits to transform them,” he said.

“It’s about changing the traditional port-operator model from an operator who uses data, into a model in which an operator uses technology driven by data to optimize the provisioning of the port services.”

The interview reflects on Inform’s Sci-Fi Novella, released in partnership with PTI, “2038: A Smart Port Story”.

One notion addressed in the book is that major equipment assets may no longer be purchased, instead they are leased on an as-needed basis.

In this asset- and infrastructure-heavy industry it can be difficult to evolve quickly but if this concept were to be widely implemented in the future. This would see transformation of many business models across the industry.

Where ports would gain a real competitive advantage, according to Martin, is through the digital twin as a concept which Royal HaskoningDHV is exploring. This can provide a predicitive capability in terms of equipment failures, essentially looking to better plan for such incidents through simulation.

Meanwhile, the sharing of data still presents challenges for the industry, as highlighted in 2038: A Smart Port Story.

Martin said it is possible to solve these challenges this decade.

“There’s definitely an opportunity to do it. I’ve had an opportunity to join a lot of webinars recently and many people are talking about this. People in influential positions at various ports talk about data sharing and the need to do it. It’s about actually starting to walk the walk instead of just talking the talk,” he said.

Speaking of today’s environment, COVID-19 and trade wars, Martin said that these will not necessarily have an impact on globalization because people are still going to be consuming goods, whether they are made locally or no.

“If you’re not shipping the goods, you’re going to be shipping the resources that you use to make the goods. I think there’s a lot of cards in play. Political agendas are sometimes driven by individuals rather than by the collective good; it might just be one man’s desire. I don’t think it’s going to impact on the supply chain as such. We might see a shift of activities, but as I say, the movement of goods will still continue in some shape or form.”

He also said that the COVID-19 crisis has presented the industry with a unique opportunity as it has “forced a dramatic shift on us all.”

“We’ve seen organizations that were hugely resistant to any kind of technological change adapt to it in a matter of weeks because the business now must rely on it. I think they should absolutely grasp that momentum that they now have and keep moving forward. They’ll see some profound effects upon their business as they start to really grasp that technology.”

2038: Future Visions is a series of interviews from leading maritime logistics professionals who share their view of what the future of our industry will look like in the year 2038. It is brought to you in partnership with Port Technology. 2038: Future Visions builds on the award-winning book 2038: A Smart Port Story Inform published in 2019.

2038: A Smart Port Story explores the terminal of the future and the intricacies of technology and its impact on both the port industry and society. Join Douglas as he unravels the mystery around an incident at the Port of Reykjavik, which sees an AGV collide with a human leaving their life hanging perilously in the balance.