Future Visions interviews: 2038 and the evolution of ports 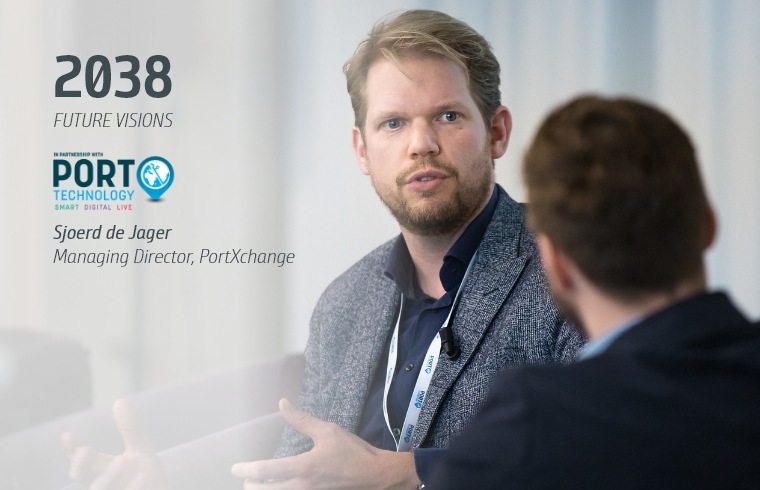 Inform has released the first in a series of Future Vision interviews which take a deep dive into the evolution of ports centered around 2038: A Smart Port Story.

As we begin a new decade, Inform spoke to Sjoerd de Jager, Managing Director at PortXchange, to discuss what changes we might see over the next 20 years.

Speaking with Sjoerd de Jager, Inform talks through a timeline of evolution of ports through to 2038. Beginning with 2019 it is noted that we are now dealing with a lot of emerging technologies including augmented reality, 3D printing (additive manufacturing), 5G, autonomy and artificial intelligence.

Talking of how ports and terminal can embrace and implement these technologies de Jager notes how the Port of Rotterdam took a “leadership role” and suggests that if the market is not driving the new innovations then port authorities will begin to take on this role.

Looking to 2024 and the presence of data wars in the early 2020s Inform asks how industry moves past the idea of competitive challenges around data sharing.

Lack of standards is once again an issue that needs to be resolved with the IMO and UN needing to play a role to get a level playing field, according to de Jager.

Jumping to 2029 the interview explores social challenges that are imposed by the advancement of automation.

Every change will have an impact on the social dimensions, de Jager points out with a definite impact on job creation. This is not to say that there will be no jobs, but the type of job is likely to shift dramatically.

Referencing the 2038: A Smart Port Story novella, de Jager said, “What I really liked about your novella had to say that there will be sorts of no-human areas in the port. You already have a bit of that in Rotterdam as well where there are parts that are completely autonomous. That will further increase.”

As well as the impact on jobs, the future of ports looks to be dramatically shaped by climate change. This will certainly open new trade routes as well as creating an energy transition from fossil fuels, this will have a huge impact on trade flows and see ports as new regional hubs.

Looking ahead two decades, de Jager spoke of what he sees as the key trends, including the end of trade wars, continued globalization and the change in the type of goods demanded by the consumer.

On the 2038 novella, de Jager said, “I really like the creativity and also some of the science-based elements of the novel. I think there’s great value to that, and hopefully, partially, it will be true, and we can all hold you [Inform] accountable for the fact that it indeed happened. But as with many of those things, the future starts now.”

2038: Future Visions is a series of interviews from leading maritime logistics professionals who share their view of what the future of our industry will look like in the year 2038. It is brought to you in partnership with Port Technology. 2038: Future Visions builds on the award winning 2038: A Smart Port Story INFORM published in 2019.

2038: A Smart Port Story explores the terminal of the future and the intricacies of technology and its impact on both the port industry and society. Join Douglas as he unravels the mystery around an incident at the Port of Reykjavik which sees an AGV collide with a human leaving their life hanging perilously in the balance.

More from the World of 2038 – The Athena Interviews

The Athena Interviews is a series run in 2019 where INFORM’s, Matthew Wittemeier interviewed the main AI character from 2038: A Smart Port Story across a broad range of topics surrounding AI. In an interactive video format, readers/viewers are introduced to Athena as together, they explore thought-provoking questions about the future of logistics, technology, and AI.

Missed the beginning of The Athena Interviews? You can pick it up from the start at: PTI Exclusive: Athena Q&A Part 1.