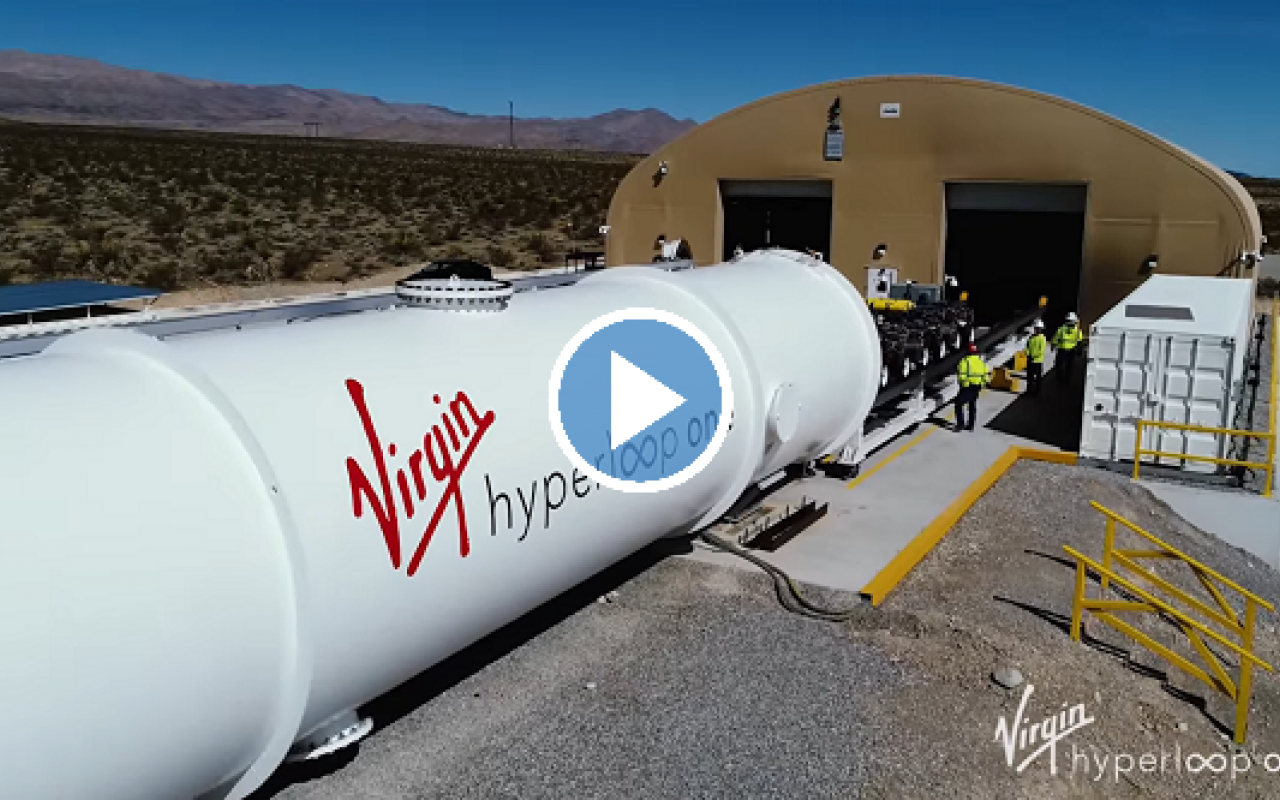 During a visit to the Virgin Galactic test site in the Mojave Desert, California His Royal Highness Mohammed bin Salman bin Abdulaziz, Crown Prince and Minister of Defense of the Kingdom of Saudi Arabia unveiled the newest Vision 2030 Hyperloop Pod.

The video, released by Virgin Hyperloop One on April 4, 2018, shows the latest test of the technology.

The crew load the pod into a large tube, which is then sealed to create a partial vacuum.

Within the vacuum tube the pod is propelled by powerful magnets, effectively levitating the vehicle, allowing it to theoretically reach speeds that wheels would not allow or withstand.

Image courtsey of Hyperloop One

The introduction of hyperloop technology into the Kingdom of Saudi Arabia (KSA) is set to revolutionize travel connections, featuring speeds up to 2-3 times faster than current high-speed rail solutions.

Virgin plan to implement direct to destination services, severely cutting travel times and exponentially increasing connectivity across the KSA and the wider Gulf Cooperation Council (GCC) – travelling from Riyadh to Jeddah is proposed to take 76 minutes (currently over 10 hours), and traveling from Riyadh to Abu Dhabi would take 48 minutes (currently over 8.5 hours).

Read “The Singularity: Unifying Technology”, our free technical paper on the impact it the technological singularity will have on society and industry

His Royal Highness Crown Prince Mohammed bin Salman bin Abdulaziz commented: “We look forward to advancing the relationship between KSA and VHO while we develop innovative transport technologies like hyperloop, accelerating Vision 2030 objectives to transform the Kingdom of Saudi Arabia from a technology consumer to a technology innovator.

“Hyperloop is the catalyst to enable all 4th generation technologies to flourish in the Kingdom while creating a vibrant society and thriving economy through visionary cities and high-tech clusters.”

Image courtsey of Hyperloop One

During the visit, HRH and Virgin Hyperloop one discussed the impact introducing hyperloop-enabled transport would have on the KSA’s economy – stimulating economic growth and diversification of industry, spurring job growth and increasing the GDP 1-2% across the Kingdom.

Co-Founder and CTO of Virgin Hyperloop One, Josh Giegel: “Our continued support from HRH and collaboration with Vision 2030 will allow the VHO system to connect with cities across the Kingdom turning commute times from hours into minutes.

“It was an honor to host HRH the Crown Prince and advance our discussions around the implementation of the hyperloop system and Innovation Center facility, enabling Vision 2030 to nurture the nation’s entrepreneurial culture, and grow an innovative highly-skilled workforce through meaningful transfers of knowledge and technology.”

Watch Hyperloop One's video below for an explaination on how Hyperloop works: