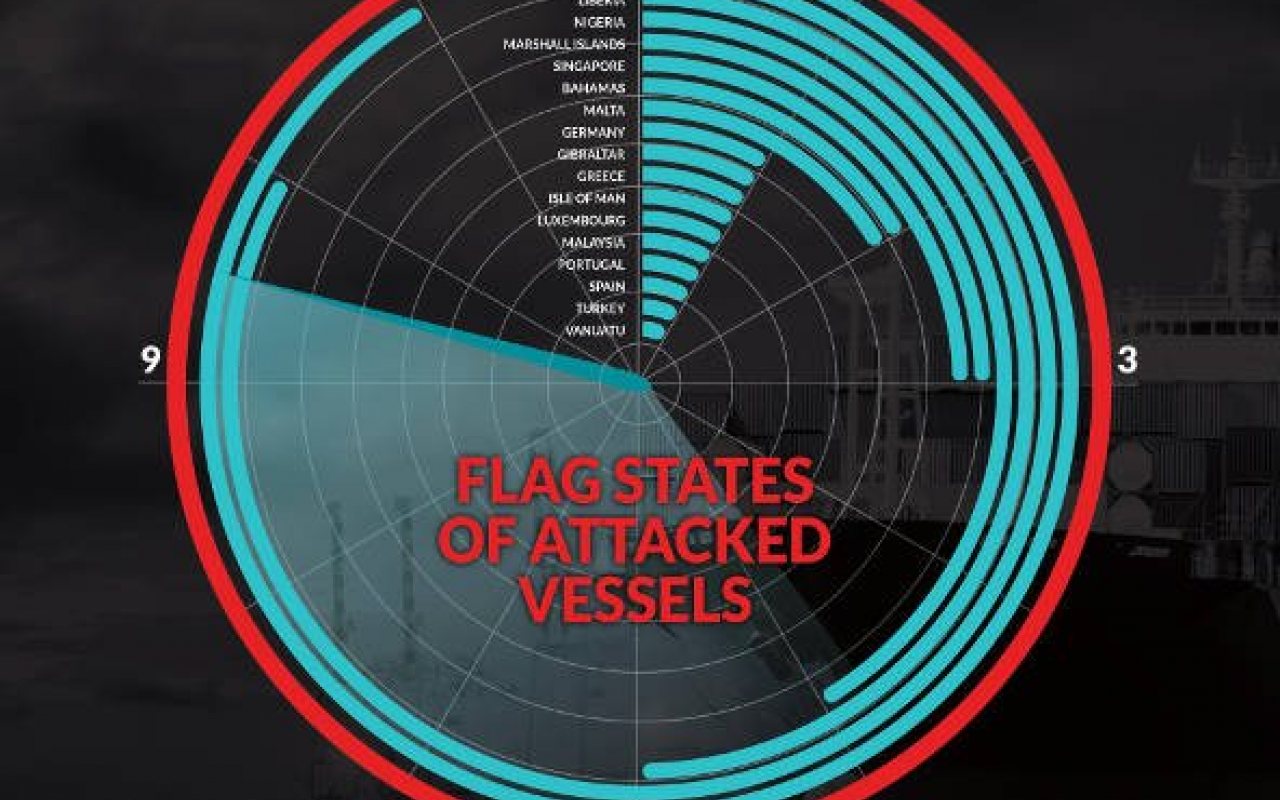 The Gulf of Guinea continues to be one of the most dangerous bodies of water in the world for merchant shipping. Armed and dangerous pirate gangs from the Niger Delta have been responsible for attacking commercial vessels throughout the wider region, conducting armed robberies, stealing oil and abducting crew for ransom. This article presents the EOS Risk Group intelligence department's infographic for Nigerian piracy.

Jake Longworth heads up EOS Risk Group’s intelligence and advisory department. He holds a BA in International Relations and an MSc in Conflict Prevention, Sustainable Peace and Security, both attained at Durham University.  Longworth has worked in the security industry since 2014 and has experience in security operations management and intelligence analysis. He also has first-hand experience supporting clients in active pirate hijack and kidnap response situations, and regularly advises marine insurance underwriters, shipping companies and cruise ship operators on maritime security issues.

Q. What were the key developments for maritime piracy in the Gulf of Guinea in 2016?

In January 2016, a fresh wave of militancy and insecurity struck the Niger Delta region.

Militant groups, both old and new, embarked on a concerted campaign to cripple Nigeria’s oil and gas industry, costing Africa’s largest crude oil producer over USD$7 billion in lost revenue by the end of the year.

Militant groups, such as the infamous Niger Delta Avengers, the Niger Delta Greenland Justice Mandate and the Bakassi Strike Force, accuse international oil companies and the Nigerian Federal Government of the unfair distribution of the Delta’s resource wealth.

Increased insecurity in the Niger Delta has coincided with an uptick in pirate attacks off Nigeria in 2016.

Throughout the year, Nigerian pirate groups cemented their shift away from the hijacking of tankers for product theft – with only one attempt recorded in 2016 – and have instead turned their focus almost exclusively to the kidnap of crew for ransom.

This change in modus operandi has largely been driven by a decline in global oil prices, improved regional maritime surveillance and the purging of corrupt institutions in the Niger Delta.

Whilst the threat of product theft has not disappeared, demonstrated by the hijacking of the MT Maximus off Abidjan in February 2016, kidnap for ransom is now the overriding security concern for vessels operating on the high seas.

Q. How many pirate attacks were reported?

At least 52 Nigerian pirate attacks were launched throughout the year.

However, this number should be considered a baseline figure only. EOS removed all unconfirmed incidents and suspicious sightings from its statistics.

The International Maritime Bureau (IMB) has stated that the under-reporting of attacks off Nigeria is a cause for concern.

Q. Where did attacks occur?

Unlike tanker hijackings, which have occurred as far south as Angola and as far west as Cote D’Ivoire, marine kidnap for ransom is typically conducted in much closer proximity to the Niger Delta.

During 2016, the clear majority of attacks were conducted within a lane running 130nm offshore of the Niger Delta and within 40nm of the coasts of east Rivers, Akwa Ibom and Cross River States, Nigeria.

Outliers were present, but rare.

Q. Which vessels are most at risk?

Certain vessel characteristics, such as low freeboard and speed, can make a vessel a more attractive to pirate gangs, but all commercial vessels that can be boarded from the water are at risk of being attacked when they are navigating in piracy risk waters.

This is because the commodity the pirates currently value most is the vessel’s crew and not its cargo.

A pirate group attacked two vessels off Bayelsa State in 2015, securing hostages from one vessel but failing to board another due to its higher freeboard.

Once EOS had facilitated the release of the seafarers, they informed the crisis management team that the pirates had added four metres to their existing aluminum boarding ladder while they were in captivity.

The clear majority of attacks off Nigeria in 2016 involved oil/chemical tankers, followed by offshore support vessels.

This is unsurprising, as both vessel types are the most frequent visitors to Nigeria’s offshore oil terminals.

Q. How do most attacks play out?

In 2016, pirates fired upon the vessel with automatic weapons as they were approaching in at least 38% of reported attacks. EOS is also aware of a few cases where pirates have been in possession of makeshift explosives during attacks.

During one case in 2016, pirates threw tin cans with explosives and a lit fuse onto the deck of a tanker prior to the boarding the vessel, although fortunately the devices failed to detonate.

This was possibly an attempt to further intimidate the crew into stopping the vessel or to try and dislodge razor wire protecting the tanker's guard rail.

If able to get alongside, pirates will use a ladder and occasionally grappling hooks to scale the ship’s freeboard and gain access to the deck.

Once onboard they will head directly to the bridge to attempt to access the crew.

This period poses the greatest risk to those onboard, as pirates are often intoxicated with drugs and alcohol, may fire indiscriminately and are anxious to depart before a possible naval intervention.

Whilst the crew are the primary target, the pirates will often steal valuables onboard and damage communications equipment to reduce the likelihood of a response.

If the crew are accessible, the pirates will select their victims, blindfold them and depart for their camp in the Niger Delta.

Q. How many seafarers were kidnapped in the Gulf of Guinea 2016?

At least 52 seafarers were kidnapped from commercial vessels in the Gulf of Guinea in 2016, a 41% increase from 2015.

The Master of the vessel is almost always included within the kidnap victims, along with other high ranking officers who are a) more likely to be on the bridge at the time of the attack and b) more valued by pirate gangs.

Pirates kidnapped between one and six seafarers during each successful attack.

Q. What measures do shipping companies take to protect their crews from pirate attacks?

Razor wire, safe rooms (citadels), pressurised water hoses and other physical measures can be taken by Masters to help prevent pirates from boarding their vessel and gaining access to the crew.

Many lessons learnt from Somali piracy in the Indian Ocean have been transferred to the Gulf of Guinea.

Without more comprehensive reporting, it is difficult to know which measures have been most effective in deterring pirate attacks, although data compiled by EOS suggests that crews successfully used citadels to protect themselves in 37% of cases where pirates boarded their vessel.

Whilst sensible, re-routing a vessel away from high risk waters isn’t always possible off Nigeria, as some terminals and ports cannot be reached without running the pirate gauntlet.

Armed security services are available for vessels navigating the Gulf of Guinea risk areas, which typically involves the sub-contracting of staff from local state navies.

In 2016, 21% of vessels attacked were carrying embarked Nigerian Naval guards.

Q. What happens to the crew once they have been kidnapped?

The crew will often be taken to the pirate group’s hideout in the Niger Delta, from where negotiations will be staged.

Treatment in captivity varies depending on the pirate gang, but in EOS Risk’s experience as a Lloyd's of London approved K&R response company, pirates rarely physically harm hostages if sensible negotiation strategies are used.

Once negotiations have concluded, a collection team must be sent to secure the hostages from a pre-arranged location, which is typically in an isolated and inhospitable area of the Niger Delta.

During their time in captivity, the crew will be exposed to tropical diseases, psychological distress or trauma and potentially, physical abuse, so hostages are driven directly to hospital for a check-up and treatment post-release.

EOS Risk Group West Africa Services: EOS Risk has over a decade of experience as a maritime security service provider, with a strong operational and intelligence background protecting maritime assets in the Gulf of Guinea.

All activities are supported by the Group’s 24/7 Security Operations Centre, which offers live tracking, intelligence and Lloyd's of London underwriter approved crisis response.

EOS Risk maintains offices in the UK and overseas, providing an end-to-end kidnap response service, from first call, through negotiation, to the eventual collection and extraction of the hostage(s).