Californian ports gear up for 24/7 operations for peak season 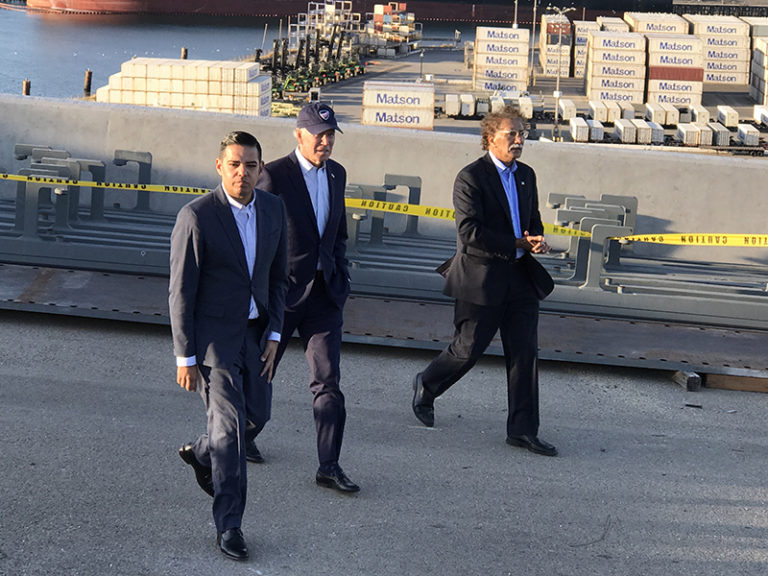 President Joe Biden has met with the heads of the ports of the San Pedro Bay on expanding gate hours to alleviate ongoing pressure on the ports’ terminals.

The President announced initiatives to address current supply challenges, including moving to 24/7 operations at the Port of Los Angeles.

Earlier in the day, Secretary of Transportation Pete Buttigieg, other White House officials, national supply chain leaders, leading retailers and labour and trucking representatives held a virtual roundtable to discuss how they can best work together during the next 90 days.

Seroka commented, “Operational details are being discussed and worked out with the supply chain stakeholders.

“The significance of today’s announcement is the commitment from industry leaders responsible for moving goods on behalf of American consumers and businesses to open up the capacity needed to deliver.  It’s a call to action for others to follow.

“We have heard directly from the President, the Vice President, Secretary Buttigieg, National Economic Council Director Deese, and Port Envoy Porcari.  We have a lot of work ahead.”

The Port of Long Beach expanded operations at one of its terminals to overnight shifts in September, and held a regional supply chain summit attended by Porcari along with representatives from Gov. Gavin Newsom’s office to take steps to speed up cargo handling.

As part of the coordination facilitated by the Biden administration, the International Longshore and Warehouse Union (ILWU) agreed to work extra shifts, clearing the way for private businesses to adjust their operations to move cargo 24/7 to clear the backlog.

Cordero first introduced the idea of 24/7 operations before the pandemic, during the State of the Port conference in January 2019, in a bid to solve looming supply chain hiccups.

Cordero added, “Whenever we are faced with a crisis here, it’s our philosophy to channel it into something positive.

“Before this unprecedented cargo surge began, we believed 24/7 operations were the future. After all, consumers can shop online at any time, whether it’s at 4pm or 4am, and 24/7 is already the standard at our partner ports in Asia.

“The supply chain truly never stops now, and we’re thankful to the Biden administration for using its influence to ensure cargo is always moving.”