Oil spill tracking and dispersant monitoring have been a concern for many years, but they come to the forefront of attention when there is a major occurrence such as the Gulf of Mexico Deepwater Horizon Spill. Fluorometry has been used for years as a tool to aid in oil spill tracking and during the incident several government agencies, universities, and consulting groups relied upon fluorometers to provide tracking information.

No two compounds have the same fluorescent signature. It is this principle which makes fluorescence a very useful tool for determining the presence and estimating the abundance of a specific fluorophore of interest. Oils are typically excited using ultraviolet wavelengths (300-400 nm) and fluoresce in the visible wavelength range (400-600 nm).

A common protocol for tracking the effectiveness of oil dispersants is SMART – Special Monitoring of Applied Response Technologies. SMART was jointly developed by the U.S. Coast Guard, the National Oceanic and Atmospheric Administration, U.S. Environmental Protection Agency, Center for Disease Control and Prevention, and the Minerals Management Service to monitor response technologies during oil spills. Protocol development began in 1997 and after much field-testing the protocol became available for review and comment in 1998. SMART is a living document and is revised as experience is gained and new technology acquired [1].

There are several levels of response defined in the SMART protocol. Tier I involves visual tracking. Tier II is intended to confirm the visual observations by adding real-time data using a fluorometer sampling one meter below the dispersant-treated oil slick as well as water-sample collection for later analysis. If monitoring indicates that the dispersant application is effective, Tier III may be employed to collect information on the transport and dilution trends. Tier III either uses one fluorometer being lowered to approximately ten meters sampling at several depths or two fluorometers towed from a ship at different water depths (one and five meters are commonly used) transecting the oil slick. Often, these fluorometers are supported by a portable laboratory enabling other measurements of water such as temperature, pH, conductivity, dissolved oxygen, & turbidity in an effort to further explain the behavior of the dispersed oil [2].

At its inception, the SMART protocol utilized the Turner Designs 10AU configured as a flow-through fluorometer as the primary instrument for Tier II and Tier III. Since its revision in 2006, the protocol allows discretion in selecting the type of fluorometer used. Though the 10AU served the program well for many years, the development of in situ fluorometers offered promise for enhancing the fluorometry-based aspects of the SMART program. 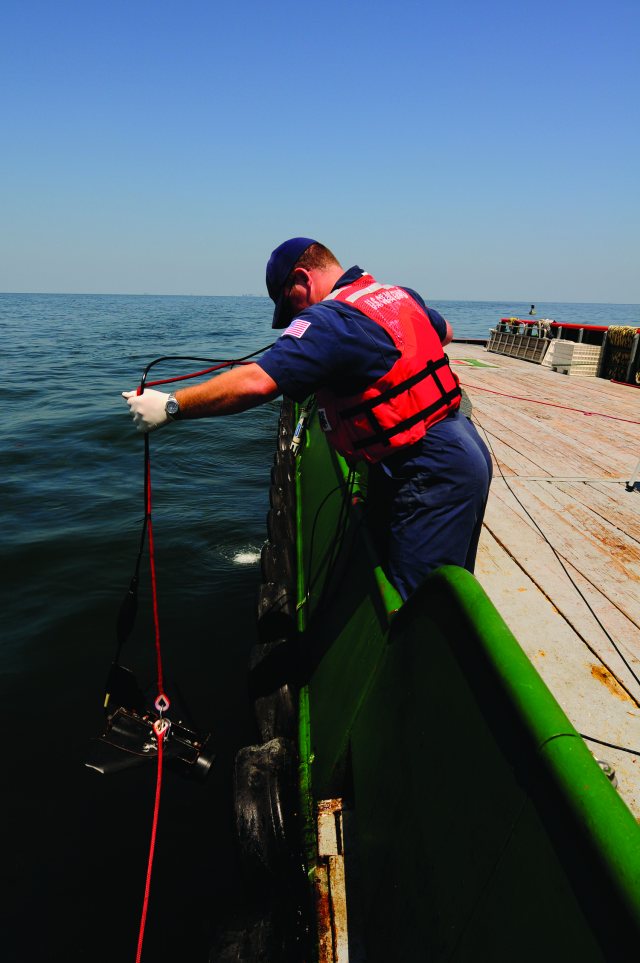