Why are more ports using drones? 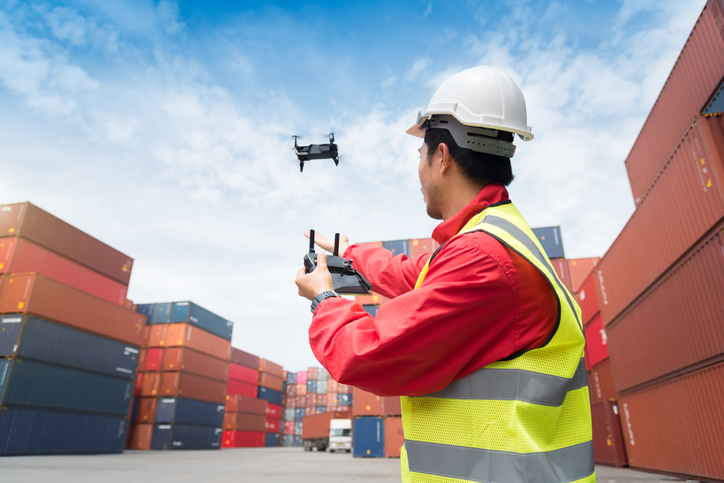 Drones are just one emerging technology aiding port operations across the globe. At PTI we thought it was time to delve into why this machinery could be a key asset for ports in the future.

This new type of technology has, over the last few years, been utilised in everyday life more and more, whether it be retail conglomerates using them to deliver packages or simply members of the public piloting them for pleasure. However, they do present a whole range of advantages for their use in the maritime industry.

Arguably, one of the main uses of drones in this sector is to help improve security and safety at ports. Cameras on the machinery allow for imaging to be remotely accessed by port authorities and give updates on happenings around their respective complexes.

The Port Antwerp has been one port leading the charge with this, having previously worked alongside the European Maritime Safety Agency (EMSA) to expand the use of drone technology in its port operations, citing improvements to security and safety as the main driver. The port went on to say that the technology will allow authorities to manage, inspect and monitor large areas.

Paul Wauters, Harbor Captain at Port of Antwerp commented, “This collaboration with EMSA allows us to use new technologies in our enforcement, in order to be able to respond more quickly to incidents and create a safer port for port users.”

On top of this, in October 2021, the port partnered with Aerospace company Sabca to conduct field trials of a fixed-wing drone fitted with cameras to assess its real-time on-site security imaging.

The Port of Rotterdam followed suit as it announced a successful drone pilot in October 2021 after a section of the quay at the Yangtze Canal was transformed into a drone port to demonstrate a long-range drone from the Dutch company Avy.

This directly linked into the port’s ambition to test new technologies that make the port, safer, smarter, and faster.

During the week of 25 October 2021, a live view of the drone images was streamed to assess the added value of the drone images in comparison to images from fixed cameras in the port. For this, a construction site hut in a section of the quay at the Yangtze Canal was converted into a command centre and Avy station.

One further advantage of drones in the port sector is that they are able to get to hard-to-reach places, for example underwater. The Freeport of Riga trialled the technology for this use, collecting accurate data on the technical condition of its underwater infrastructure.

With the drones able to reach depths of up to 150m and automatically generate analysis reports, the port can analyse improvements needed to be done on the infrastructure.

However, a fleet of drones will require a resilient and strong digital infrastructure to connect to in order to ensure the operator and drones do not falter in connectivity. Many ports have been investing in 5G networks recently to benefit elements of their operations such as this, but it can be a costly expense.

Additionally, while small ports seem to be interested in utilising these machines, some are waiting for larger ports to demonstrate how useful they are and conclude whether or not they are worth the investment.

It is clear to see that different types of drones come with many different uses, all of which could benefit companies in the maritime industry, primarily ports. In the near future, we will be to see the full impact of this technology on the sector as major players continue to look it to modernise their operations.