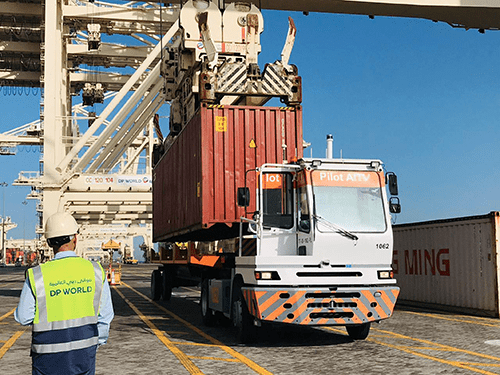 A contract between DGWorld and DP World will equip DP World’s Jebel Ali Port, the world’s ninth busiest seaport, with a fleet of DGWorld’s AITVs, including integration into the existing operational processes and infrastructures.

DGWorld’s goal is to further increase the operational efficiency of the terminal and reduce the overall size of the currently used fleet.

According to Matthias Krause, General Manager at DGWorld, “We trialled other wireless technologies, including the latest 5G, before discovering Rajant. They all had the same physical limitation, which is that wireless cannot go through large, metal container stacks.

“Rajant‘s Kinetic Mesh M2M technology allows the vehicles to talk to each other, which is critical to communicate fleet directions between container stacks. Velodyne Lidar has proven that their sensors are delivering unmatched data and can handle even harsh environments without problems, so it was an obvious choice.

“Both Velodyne and Rajant provided local support to ensure the project was a success. We have been impressed with their professionalism and extra support over the last several years.”

“We are pleased to be chosen to make this AITV fleet deployment possible. Rajant is the only industrial wireless network for mobile machine-to-machine (M2M) communication, which is also capable of overcoming RF signal blockages of large metal containers and signal interference from ships, radar, and neighbouring ports.”