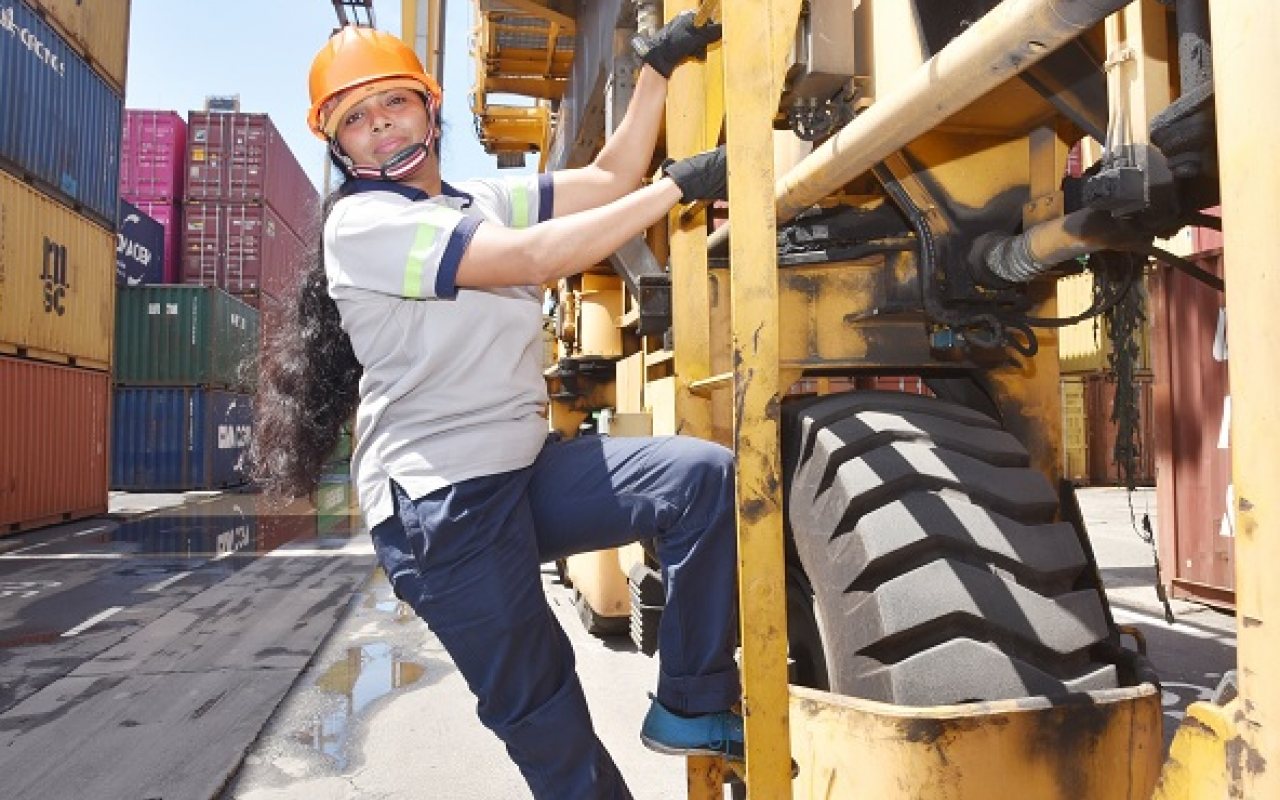 In the first instalment of a two-part feature, Port Technology welcomes guest author Nilantha Ilangamuwa from the Port of Colombo to offer an insight into the pioneering women working with huge cranes at the world’s fastest growing port. Read Nilantha's insight below:

It is a remarkable story. They have earned exceptional life experience at an early age and embarked on an unprecedented journey. The path they have trodden is a shining example of female empowerment and gender equality, one of the most important pillars of a sustainable society.

“Why don’t we go up and talk? So then we can prevent noises in the surroundings and you can see where we work. Are you afraid? It is just a few hundred feet above the ground” one of the operators suggested. Her energetic and confident voice demonstrates an enthusiasm for this exciting duty.

Following her suggestion, we began climbing. It took us a few minutes to reach the operations room of a rubber-tyred gantry crane, also known as transtainer.

The edge of the crane allowed us to appreciate the beauty of the area surrounding Colombo Port. Fear of heights – or acrophobia – suddenly disappeared.

Finally, we started to listen to them, and their stories.  This is the first opportunity I was given to speak with the women crane operators employed at the Sri Lanka Ports Authority, an institute awarded as the Port Authority of the year recently.

Formed in 1979, the organization is counting down the days to its 40th anniversary later this year. The Port of Colombo, which it manages, was ranked as the highest container growth project in the world, moving over 7 million containers in 2018.

Poojani said: “I never thought that I could get an opportunity to join the most efficient state institute in the country. My father always encouraged me and taught me to stay strong under any circumstances, which drive you to a situation where dreams can appear to be flattering and shattering.”

Dilki Poojani, the youngest crane operator at the Port of Colombo

There are three types of gantry cranes deployed in Colombo Port, and she is well equipped to handle each of them without hesitation. Dilki’s achievement is the result of a long journey, travelled by women who struggled for equality, fraternity, and dignity by overcoming challenges in a male-dominated society.

The historical fate of a woman in Indian society, subsequent to the death of her husband, underlines the horrendous depravity these citizens have endured. The situation in the west has not been wholly different from the east. Women were treated as subordinate and most of them were subjected to men.

Long-rooted brutal suppression against women has contributed to a global struggle against existing systems and traditions. Women gathered, discussed and demanded different treatment by standing against the violations of their basic rights.

The project is being initiated to ensure Colombo, the world’s fastest growing port in the first half of 2018, taps into the rapidly advancing smart technology market… #PTIDaily #India #Ports #SmartTech https://t.co/YIqXAw1I4L

In one of her speeches, advocate for women's rights Clara Zetkin pointed to the essential part of this struggle: “Women are subjugated by men and they will continue to be in that position as long as they are not economically independent.

“The quintessential prerequisite for their economic independence is work. If one wants to transform women into free human beings and into equal members of society just like men, then there is no necessity to abolish or limit women's work.”

The struggle for women’s rights in Sri Lanka also has a long history. This can be traced to the reign of Kuveni, also known as Sesapathi, and the revolutionary lifestyle of Donna Isabella Koraneliya.

Those characters are roots of the emancipation of woman and their struggle for equal rights in Sri Lanka. Every woman who fights for equality is empowered by the heritage of these pioneers.