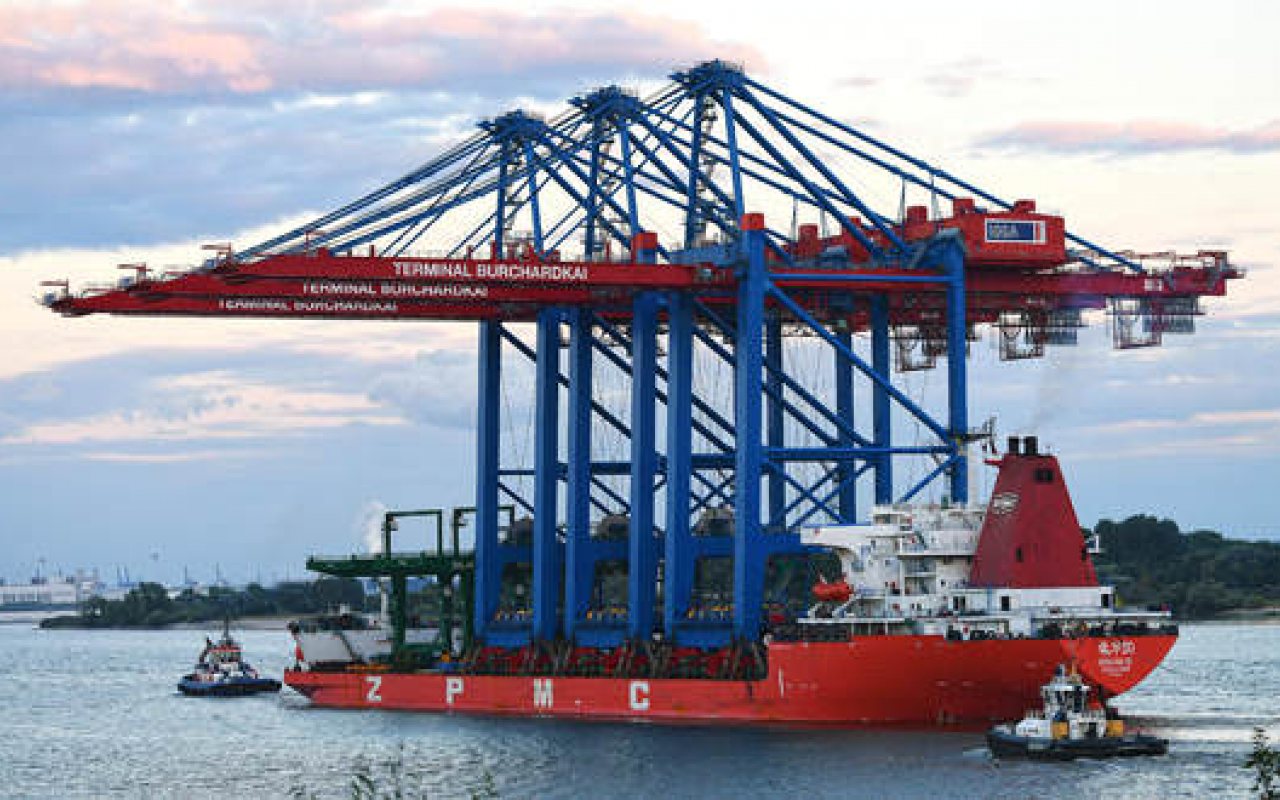 HHLA now has a total of eight of these gantry cranes at CTB. As soon as the three new gantry cranes have gone into operation, CTB will be able to handle ships with a capacity of 20,000 TEU or more at two berths.

The three container gantry cranes arrived in Hamburg on August 14, 2016 after an approximately ten-week journey from Shanghai to Hamburg

Before taking charge of them from global market leader, ZPMC, CTB staff carried out extensive tests on the container gantry cranes on site, which were produced in the vicinity of Shanghai.

They will be prepared for use over the next few months before the final inspection and will be put into operation successively at CTB at berth 5/6 from the end of 2016.

HHLA will then have two berths for handling the latest generation of mega-ships at the CTB.

Technical Paper: How The Port Of Hamburg Became Mega-Ship Ready.

Dr. Stefan Behn, member of the Executive Board of HHLA, said: “The cranes which have now arrived are a key part of the long-term programme of upgrading the CTB. The number of calls made by particularly large vessels has been on the rise for quite a while.

“That’s why it’s important for us to be able to provide our shipping company customers with two berths at the CTB in future, where we can handle the mega-ships.

“This ensures the high level of productivity that our customers are used to and provides for the flexibility that is necessary for handling these very large vessels.”

The new gantry cranes from ZPMC are designed for container ships with 24 transverse container rows.

Thanks to their 74-metre jibs, they are very well equipped to handle ships with a loading capacity of 20,000 TEU and more.

The height of the cranes’ jibs has also been optimised and they can now handle nine containers placed on top of one another on deck and operate in tandem mode.

Each container gantry crane weighs 2,400 tonnes and can handle a maximum payload of 110 tonnes.

Dr Behn continued: “We will put the four additional automated storage blocks that are currently being built into operation in 2017. This will provide us with greater capacity and flexibility, which we can use to absorb the peak loads resulting from the mega-ships.”

Dr Behn concluded: “We are also planning the expansion of the rail terminal at the CTB. The CTB rail terminal is the second largest in Europe, and we handle almost as many rail containers there as the entire Port in Rotterdam. The programme of expansion at the CTB will help us to further optimise our highly efficient handling processes.”

PTI reported earlier in 2016 that Hamburger Hafen und Logistik AG (HHLA) has completed the expansion of the rail terminal at its Container Terminal Altenwerder (CTA) significantly earlier than planned in June 2016 rather than the predicted August 2016.