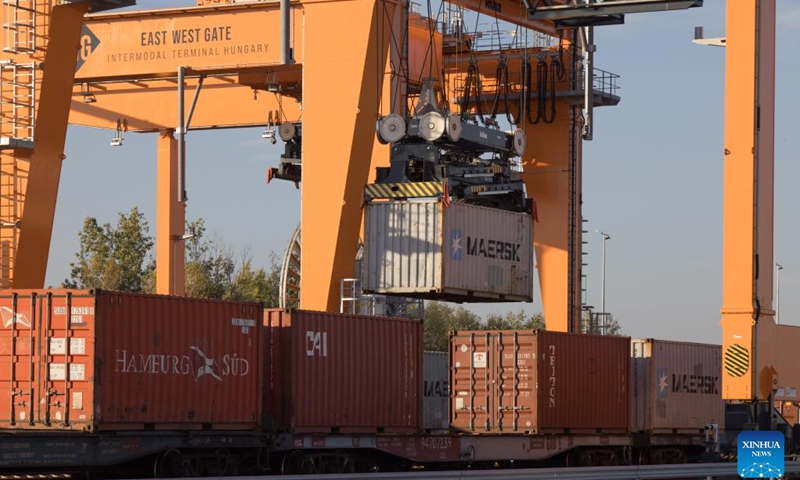 The new intermodal terminal East-West Gate (EWG) has opened in Fényeslitke, on the Hungary-Ukraine border – the first 5G-operated logistics terminal in Europe.

With a private investment from East-West Intermodal Logistics Zrt. of more than HUF40 billion ($95 million), EWG can handle up to 1 million TEU per year and is the largest such facility on the continent in terms of both capacity and area.

The new terminal is suitable for loading trucks and conventional road semi-trailers onto rail and offers significant capacity for transshipment of agricultural products.

EWG is expected to become the largest rail hub for Ukrainian food exports.

Following preparatory works, construction started in January 2021 on an 85-hectare site to build a total of 10 kilometres of standard and wide-gauge railway track and 225,000 square metres of concrete pavement.

A warehouse of 15,000 square metres is also available for use.

EWG received the railway licence from the National Transport Authority in June following a successful technological and technical trial run.

“With the construction of the East-West Gate, Hungary is back on the map of international rail logistics,” said János Tálosi, CEO of East-West Intermodal Logistics Zrt.

“EWG is independent, and its services are available to any rail and road freight company in the world, open to all freight forwarding operators and carriers.”

EWG is the first in Europe to control cranes remotely using 5G technology.

The terminal has a 41-metre wide and two 28-metre-wide giant cranes on rails, as well as a 20-metre-high rubber-tyred crane (RTG).

The cranes, supplied by Austrian company Künz, are equipped with 20 high-resolution cameras which can be viewed in real time with the help of 5G.

The private 5G network was built by Vodafone Hungary and the network equipment supplied by Huawei.

“Investments in private 5G networks will clearly pay off, as new industrial and logistical business models can be built on next-generation mobile networks, which can contribute to the development of Hungarian companies, job creation, and last but not least, stimulate exports and make Hungary an attractive destination,” said said Mátyás Dobó, Deputy CEO of Vodafone Hungary’s Corporate Services Business Unit.

“A great example of this is the private 5G network deployed at the East-West Gate terminal, whose increased speed, capacity and minimal latency will enable the efficient and flexible operation of a smart rail combined terminal equipped with the latest devices, technologies, control and security equipment.”

A realistic virtual twin of the terminal (Digital Twin) has also been created to track processes and operations of the logistics centre in real time and in 3D.