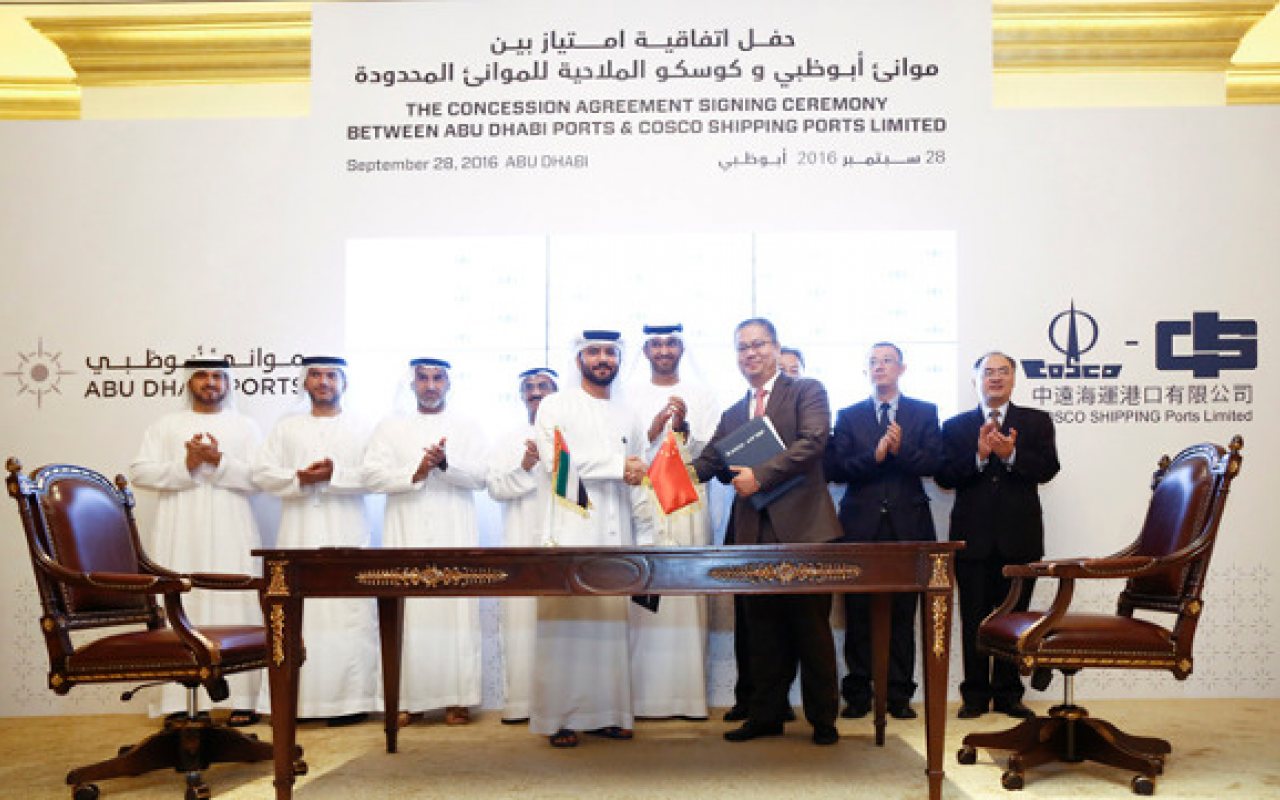 Cosco Shipping Ports Limited will operate a container terminal with a draft depth of 18 metres, with 1200 metres of quay wall and adjacent land.

Once the expansion areas are occupied, the Concession Area will span an area of approximately 70ha with three berths, which will add 2.4 million TEU a year to the port’s existing capacity of 2.5 million TEU.

The agreement includes the option for a further 600 metres of quay length in the future to allow for anticipated volume growth, and the nominal annual handling capacity will increase to 3.5 million TEU when all phases are complete, thereby creating a new overall annual capacity of up to 6 million TEU.

The global port operator giant is establishing a joint venture company in 2016 to operate the new Khalifa Port Container Terminal 2 in Khalifa Port, one of the world’s fastest growing container ports and a leading hub for the Middle East, Africa and South Asia (MEASA) region.

Dr Sultan Ahmed Al Jaber, UAE Minister of State and Chairman of ADPC, said: “The signing of the concession agreement between Abu Dhabi Ports Company and COSCO Shipping Ports Limited will significantly expand trade between China, the UAE and the broader region. It will greatly enhance the UAE and Abu Dhabi’s role as a key logistics and trading hub, between East and West and will also serve to further diversify the UAE’s dynamic and growing economy.

“Under the leadership of His Highness Sheikh Khalifa bin Zayed Al Nahyan, President of the United Arab Emirates and President Xi Jinping of the People’s Republic of China our two countries have enjoyed strong bilateral ties across a number of strategic sectors.

“With the development of China’s ‘One Belt One Road’ strategy, there is boundless potential for expanding the UAE-China relationship further.”

Mr Wan Min, President of China Cosco Shipping Corporation Limited, said: “Abu Dhabi’s Khalifa Port is a strategic hub along the ‘One Belt One Road’, as it has unique geographical advantage for the development of terminal and logistics businesses.

“It’s well-developed transportation and nearby ample supply of cargoes are conducive to Khalifa Port, to become the next hub port in the Middle East region. Khalifa Port Container Terminal 2 will be the second overseas terminal in which Cosco Shipping Ports holds the controlling interest. This investment is expected to strengthen Cosco Shipping Ports’ sustainable growth and create value for our shareholders.”

The expansion of the quay wall is part of the broader developments at the Khalifa Port, which include a new terminal booking, tracking and transaction system for sea and land-based users, advanced RoRo facilities, new liner calls, the development of a regional liner hub and transhipment business to South Asia, as well as the addition of approximately 14.5 million square metres now leased in the adjacent Khalifa Industrial Zone (KIZAD).