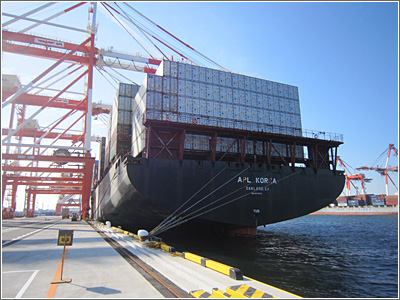 The APL ESPLANADE made its first call today at Yokohama port, becoming the CMA CGM Group’s first 14,000-TEU containership in the Japanese port.

Accommodation has been made for the Honmoku D4 terminal in Yokohama to receive larger vessels of up to 14,000 TEUs. The APL ESPLANADE arrived at the container port with 35% more capacity than the smaller vessels deployed previously.

Its arrival was welcomed by representatives from CMA CGM Japan, the Ministry of Land, Infrastructure, Transport and Tourism (MLIT), the City of Yokohama and Yokohama Kawasaki International Port Corporation (YKIP) gathered at the terminal.

The ACSA1 service calls weekly at the Honmoku D4 terminal. Operated by CMA CGM, the terminal has a total annual operating capacity of over 400,000 TEUs and contributes to about 15% of Yokohama’s port throughput.

Hideki Uchida, President of CMA CGM Japan, commented, “Our larger vessels will now cater to more inbound cargoes to Yokohama, particularly fresh fruits from Central and Southern America. With Japan’s fresh fruits imports on the rise, this capacity upgrade is a timely relief to our consignees who can be assured of vessel space for their incoming shipments. This also translates into Better Ways of serving our customers and keeping their supply chains going.”

Hiroya Nakano, Director General, Port and Harbor Bureau, City of Yokohama, added, “On behalf of the port of Yokohama, I would like to extend a warm welcome to the first arrival of APL ESPLANADE. This is the first time that the Honmoku D4 Terminal has been able to receive a large 14,000 TEU vessel. We would like to express our deepest gratitude to all those involved for their cooperation during this period, and we will continue to provide both hardware and software support to improve the convenience of the port of Yokohama for the continued call of CMA CGM Group vessels.”

The Port of Yokohama lead a new index launched earlier this year which is designed to rank the world’s most efficient ports in container management.