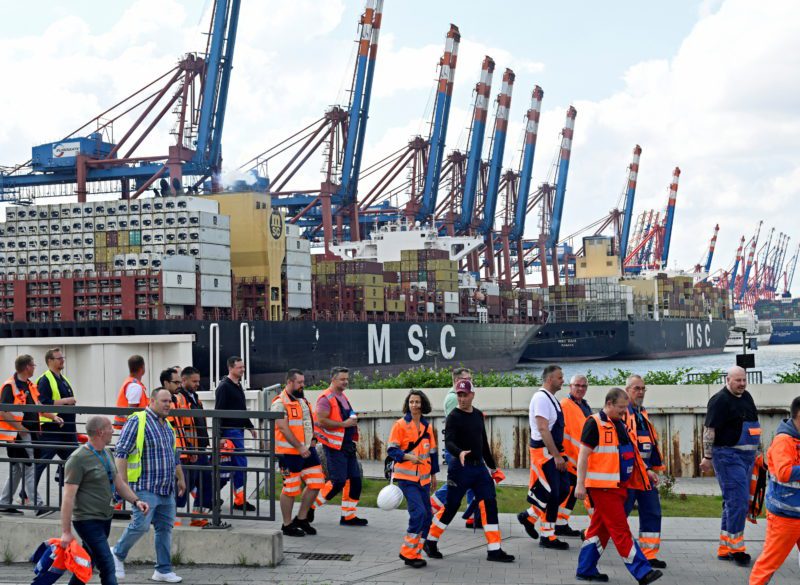 Nationwide strikes in South Korea and Germany are highly disrupting port operations as workers face pressure from inflation – ministers have warned of the devastating effects on the supply chain.

Truck drivers led by unions in South Korea are entering their eighth day of strike amidst skyrocketing fuel prices. Workers have hit the streets to demand the same minimum pay guarantees that were granted during the pandemic over the last two years.

Four rounds of negotiations with the Government have already failed to find a compromise.

Whilst the newly elected President Yoon Suk-yeol has decided not to take action against the protesters, the strikes have been deemed a threat to the country’s economy as major ports’ activities have also come to a halt.

The Port of Busan has reported reduced capacity over the past few days during a time in which ongoing disruptions across the supply chain had already damaged day-to-day operations.

South Korea’s Prime Minister, Han Duck-soo, has warned that the current disruption could cause “irrecoverable” damages on the country’s economy, as the Ministry of Trade, Industry and Energy said that the first six days of the strike had caused an estimated loss of 1.6 trillion won ($1.2 billion).

Meanwhile in the US, talks between the Pacific Maritime Association and the International Longshore and Warehouse Union are underway to produce new labour contracts for 22,000 West Coast dockworkers.

Port of Long Beach Executive Director, Mario Cordero, does not anticipate talks over the new contracts to reach a solution before 1 July deadline.

Winds of discontent are also stirring among German dockworkers, where the trade union Ver.di has rallied 12,000 dockworkers in Hamburg, Bremen, and Lower Saxony demanding compensation for inflation.

A 10-hour negotiation on 11 June ended without a result.

“This offer is far below the real wage protection demanded by Ver.di, in view of the current rate of price increase of 7.9 per cent, and is therefore unacceptable for the employees,” said the Union’s Chief Negotiator, Maya Schwiegershausen-Gueth.

Hapag-Lloyd has discontinued operations at its Hamburg’s Container Terminal Altenwerder (CTA) for four hours due to tariff negotiations, although yard capacity stood at 90 per cent – according to their recent update.

The news follows an analysis from Drewry which indicated higher berth waiting times brought on by the pandemic had already hampered productivity of Northwest European ports.