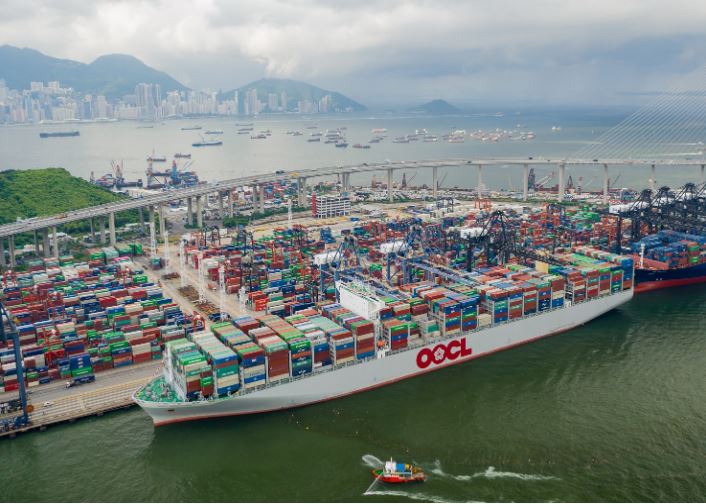 COSCO-owned carrier OOCL has released a video of one of its largest container ships making its maiden call at the Port of Hong Kong where it was welcomed by business partners and a host of special guests.

According to a statement accompanying the video, the OOCL Hong Kong has a TEU capacity of 21,413 and is one of the biggest containerships in the world.

The carrier has a special relationship with Hong Kong, which is also known as ‘Asia’s World City’, where it was founded in 1969, and which it helped establish as a global trading hub.

Hong Kong was once China’s busiest container port but since the turn of the century has struggled to keep up with China’s near-unprecedented economic boom, a phenomenon explored in a recent PTI insight.

OOCL was the first Asian shipping line to ship goods by container and the first voyage – from Hong Kong to Long Beach, USA, carried 13 TEU.

It was bought by COSCO, the third biggest carrier in the world, in 2018, as part of the Chinese-state liner expansion.

Andy Tung, Co-Chief Executive Officer, OOCL, had this to say at the ceremony welcoming the vessel into port.

“This is truly a milestone event for us at OOCL because the last time we welcomed a vessel with the same name in Hong Kong was back in 1995 which coincided with our company’s 25th anniversary,” he said.

“It was a brand-new ship, with a capacity of 4,960 TEU, and warmly welcomed by a large crowd right here at the Hong Kong port in Kwai Chung.

“Twenty-five years later, we are here once again, welcoming the OOCL Hong Kong to the port on our 50th anniversary!

“This maiden call has special meaning to not only the people at OOCL, but to many citizens living here who may see the vessel as the pride of Hong Kong.”