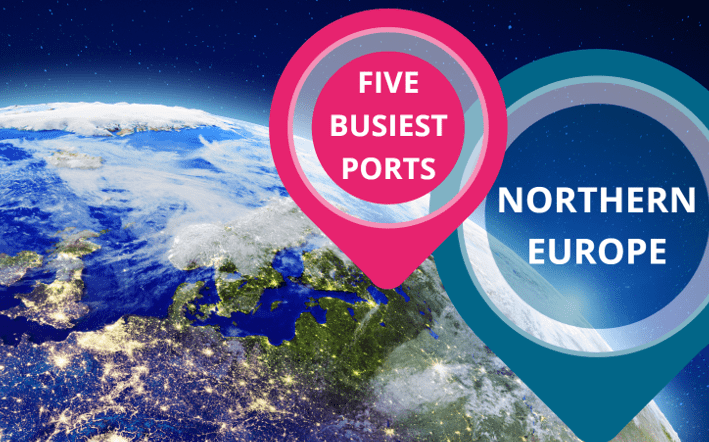 Europe is home to the some of the busiest and most technologically advanced ports in the world, which begs the question: Where are the busiest ports in Europe?

Other exclusive insights have looked at other areas of the continent, such as the Mediterranean and the UK, and here we have looked at the busiest ports in Northern Europe.

Port of Rotterdam, The Netherlands

The Port of Rotterdam is the largest port in Europe, with a throughput of 14.5 million TEU.

It is is the 11th biggest port in the world, knocked out of the 10 by Dubai.

Its stated goal is to be the world’s ‘smartest port’ by utilizing internet of things (IoT), artificial intelligence (AI) and Cloud technology. It signed a deal to that effect in January 2018 with IBM.

In recent years it has developed a global standard for accessing nautical and port information. As part of that, it launched ‘Pronto’, a platform for all stakeholders to access and exchange information related to port calls. The result is a 20% cut in vessel waiting time.

The Port of Rotterdam and BlockLab look at blockchain’s potential in an exclusive technical paper.

The Port of Antwerp is Europe’s second-largest port after Rotterdam and the 13th biggest in the world.

It is located at the intersection of Europe’s three main rail corridors and is directly linked to the pan-European barge transport network due to its place in the centre of the Scheldt-Maas-Rhine-delta.

Furthermore, 60% of European consumption centers are within the Port of Antwerp 800 km radius.

In 2018, Port of Antwerp handled over 200 million tonnes and 14,595 sea-going vessels. In the same year, the Port welcomed the first Silk Road train.

The Port of Hamburg is Germany’s biggest port, the third biggest container port in Europe and one of the 20 largest ports in the world.

It carries approximately 8.7 million TEU per year and is critically important for supplies to European domestic markets.

The Port of Hamburg handles approximately 8,000 ship calls per year. It offers nearly 300 berths and a total of 43 kilometers of quay. More than 2,300 freight trains per week and four state-of – the-art container terminals.

The Port of Bremen-Bremerhaven is the fourth busiest container port in Europe and is one of the 30 busiest ports in the world.

Operated by Bremenports, it is located in the north-west of Germany and handled 4.9 million TEU in 2018.

The port has an operating area of 90 hectares and it features four Terminals, 14 Berths and has a Quay Length 3.9 km.

The port recently became one of 80 companies, organizations and politicians to sign on to a campaign to ban heavy fuel oil (HFO) from Arctic shipping.

The Port of Felixstowe is the largest and busiest container port in Britain, and one of Europe’s largest.

It handles more than 4 million TEU and welcomes around 3,000 ships each year. It also offers some of the deepest water close to any European port’s open ocean.

Owned and operated by Hutchison Ports, Felixstowe operates around 17 shipping lines, providing 33 services to and from more than 700 ports around the globe.

Felixstowe plays a crucial role in maintaining UK trade, along with its unrivaled rail and highway connections which link it to distribution hubs around the country.

It is close to major European shipping routes and can service the latest fleet of mega-vessels.