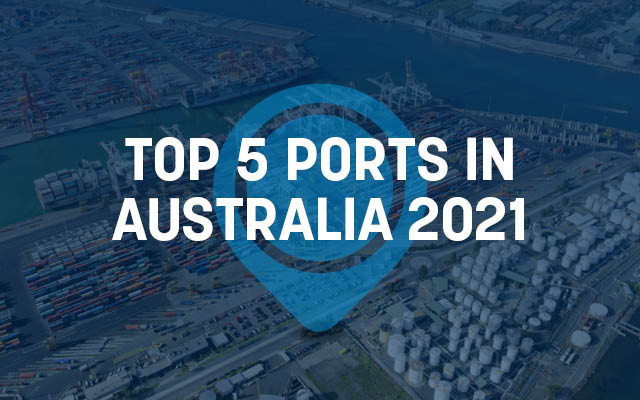 PTI goes down under in the next instalment of our ‘Top Ports’ series, this time shedding light on the biggest and best ports in Australia.

Despite summer lockdowns due to the Delta variant of COVID-19, ports across the country remained open and still managed to have a successful year.

Due to its strategic South Pacific location, Australia is a key player in international shipping.

“As an island nation, Australia’s ports have always been our gateway to the world, with 98 per cent of the nation’s trade volume moving by sea,” said Marika Calfas, CEO of Port Botany, in a recent statement to PTI.

Just shy of making our list of ‘Top 5 Ports in Australia 2021’ is the Port of Port Hedland, operated by the Pilbara Ports Authority.

Back in February 2020, the port authority signed a four-year contract to provide HR Wallingford with integrated pilot and tug master training.

Kicking off our list is Darwin Port, Australia’s closest port to Asia and the nation’s “northern gateway” for Australasian trade.

Officials from the port recently told PTI that in calendar year 2021, a total of 20,707 TEU passed through its facilities. This included 11,442 TEU in loaded imports and a further 9,265 TEU in exports.

Based in the city of Perth, the port handles almost all of the container trade for Western Australia but also has facilities for livestock exports, motor vehicle imports, other general cargo trades, cruise ships and visiting naval vessels.

Near the end of the year, the Port of Rotterdam signed an agreement with the McGowan Government in Western Australia to collaborate on the development of the hydrogen supply chain.

Port of Brisbane is yet another port in the country that had a very productive year, processing 1,554,061 TEU in calendar year 2021.

Jamie Wardle, Trade Development Executive at the Port of Brisbane, said that around AU$500 million ($362 million) of CAPEX investment has been made at Brisbane since privatisation in 2010. He also said the port is allocating another AU$680 million ($493 million) between 2019 and 2023, including AU$89 million ($64.5 million) for future port expansion, and AU$42 million ($30.5 million) to develop wharf infrastructure to accommodate larger vessels.

After going through its monthly trade reports, PTI worked out Port Botany’s total container throughput for 2021 to be 2,761,769 TEU, this was later confirmed by port officials.

“With the impact of COVID-19 and increased consumer goods purchasing, awareness of our ports’ role in supporting the nation’s economy and the lifestyles of Australians has grown significantly,” Calfas told PTI.

“Port Botany in NSW remained resilient throughout COVID-19 lockdowns in 2021, operating 24/7 to service businesses and the community, and to keep our economy moving.

“We saw growth in container volumes throughout the year, the primary driver of which was container imports, which increased as Australians continued to spend on furniture, electrical items, white goods and home renovation projects instead of travel experiences. Building material imports also increased, reflecting Sydney’s busy construction activities.

The port recently saw a record-breaking berthing with the safe arrival of the MSC Asya, the deepest and heaviest container ship to ever dock at the port.

Topping this instalment of our ‘Top Ports’ series is the Port of Melbourne.

As the country’s largest port for containerised cargo, it is only natural for Melbourne to take the top spot, handling 3,278,635 TEU in 2021.

A spokesperson from the port told PTI: “Port of Melbourne has continued to operate every day of the year during the pandemic.

“While the port has not been immune to the global supply chain challenges of manufacturing shutdown, container shortages and increased demand for consumer goods, we have worked hard to keep freight moving.

“The local workforce has been impacted at times as well, but the industry has worked incredibly hard to mitigate these challenges, and we’re proud to have processed more than 3 million TEU over the past year, consolidating our position as Australia’s largest container and general cargo port.

“Our 2050 Port Development Strategy is our roadmap to respond to anticipated future growth at the port, including some nine key projects that respond to global trends and meet future freight volumes.”

In recent months, rail has come to the forefront of the port’s initiatives as it awarded a construction contract to move ahead with its Port Rail Transformation Project (PRTP).

In a statement from December 2021, the port said it had “broken ground” on this project. Completion is scheduled for mid-2023.