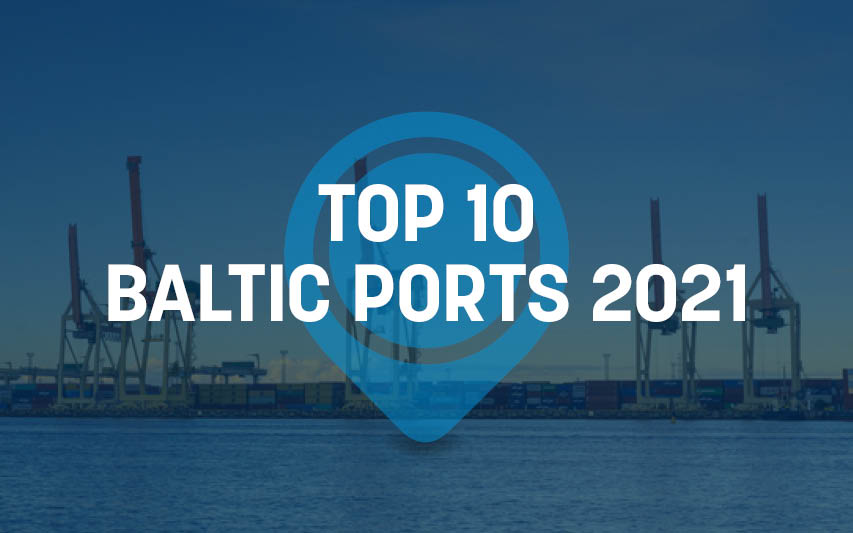 In the face of global supply chain congestion, ports across the Baltic region handled considerable container volumes in 2021.

To measure each port’s success, PTI looked at the latest container handling figures and ranked them accordingly.

Kicking off our list is the Freeport of Riga.

Due to the port’s strategic position in the capital of Latvia, the city of Riga has become an important crossroads of trade routes.

In October, the freeport announced it was trialling small compact drones that can be used to collect accurate data on the technical condition of its underwater infrastructure.

Latvian-based company DronePlan also tested its underwater drone remote control software that could be used in the construction, maintenance, and inspection of hydro-technical structures in the future.

9. The Port of Kaliningrad

The Port of Kaliningrad, also known as Kaliningradskiy Morskoy Torgovyy Port, takes the number nine spot on the rankings.

Lying on the shores of the Pregolya River, the Port of Kaliningrad is the most western port in Russia.

Next in our list is the Port of Helsinki in Finland.

The port is known as one of the busiest passenger ports in the region as well as the main port for foreign trade in the country.

In July, the port said it had reduced vessel fuel consumption by up to 2,800 tonnes every year by using a new automated mooring system.

As the largest port in Finland, the Port of HaminaKotka serves as an important hub in the Baltic region.

Klaipeda State Seaport, the most important and largest Lithuanian transport hub, comes in at number six.

In March, the SE Klaipeda State Seaport Authority awarded a development contract for the port to Moffat & Nichol following an international procurement procedure.

The project saw approximately 70 hectares at the Southern part of the port developed, with the final result being a continuous quay line that stretches 1300 metres, an entrance channel of 200 metres in length and 600 metres wide.

Up next comes the Port of Aarhus – Denmark’s largest container port.

In a statement, APMT said the terminal’s customers will experience “more operational benefits” as a result of the acquisition.

Strategically located on the West Coast of Sweden, the port has a large commitment to improving intermodal transportation in the region.

The Port of Gothenburg recently announced that it increased its market share Sweden from 48 to 51 per cent in 2021, the fourth year in a row it has risen.

“This is proof of the market’s increasingly growing confidence in the Port of Gothenburg,” said Elvir Dzanic, CEO of the Gothenburg Port Authority.

Gdynia was listed as the second largest container port on the Baltic Sea in 2008. It has now moved down to third place.

Last year, a unified Port Community System (PCS) was installed at the Ports of Gdynia, Gdańsk, and Szczecin. This is said to be crucial for the Polish Government’s plans for port development to 2030.

Andrzej Zelek, CEO of Polski PCS, told PTI in the 2021 edition of our Port Investment and Development journal, that analysis was crucial to in developing the system – but being customer-centric was a key factor.

Russia’s major seaport serving the city of St. Petersburg, comes in just shy of the top spot of our list.

Over the last year, the port competed several upgrades to its port infrastructure in a bid to modernise port operations.

The improvements included repairing railway and crane tracks, reconstructing pavements at its storage facilities and roads, and organising the construction of two new cargo yards.

This aimed to allow St. Petersburg to improve its organisation of handling operations, management of cargo flows, and further planning activities.

Being the crowned the top spot on our list of ‘Top 10 Baltic Ports 2021’ is the Port of Gdańsk in Poland.

Located on the southern coast of Gdańsk Bay, the port cites investments and development as key to increase its competitiveness.

Several key projects that were completed as part of the Port of Gdańsk’s €1.3 billion ($1.58 billion) infrastructure improvement plan were completed in 2021.

The road and rail network at the Outer Port was extended and modernised following a €163 million ($198 million) investment.

The Inner Port investment was valued at €125 million ($135 million) and was focused on the modernisation of the fairway as well as the expansion of quays and the improvement of navigation conditions in the Inner Port.