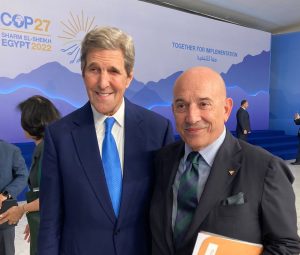 Panama, Uruguay, and Norway have signed up to the Clean Energy Marine Hub Initiative (CEM-Hubs) to support the global energy transition.

The three governments join the UAE and Canada, who were the first to join the CEM-Hubs initiative.

CEM-Hubs is a cross-sectoral public-private initiative aiming to accelerate the production, export and import of low-carbon fuels across the world.

The announcement came as part of the Green Shipping Challenge (GSC) launch event at the world leader’s summit of COP27.

Led by the US and Norway, the GSC aims to bring together governments, ports, maritime carriers, shipowners, and cargo owners to find decarbonisation solutions for the industry.

“The scale of the challenge that is global decarbonisation is enormous, and the maritime sector needs to speed up the use of green fuels and technologies,” said a spokesperson for the Norwegian government.

“By seizing the chance to work with ports, shipowners, energy providers – and in fact the whole maritime value chain – we and other governments at COP are sending a clear signal to others that there are opportunities for action rather than words on offer today.”

The CEM-Hubs initiative will engage with all members to facilitate information and knowledge exchange on policies, programmes, and decarbonisation projects.

A recent statement from ICS said this will catalyse investments in the marine infrastructure needed to transport zero and low emission fuels from producer to consumer.

“CEM-Hubs will become a real and tangible energy transition accelerator in the maritime sector and its clusters, while preparing the path for a green commercial supply chain with hubs prepared for a more sustainable future,” concluded Dr. Jorge Rivera Staff, National Energy Secretary of Panama.

During COP27, the UK alongside the US, Norway, and the Netherlands announced they will roll out end-to-end decarbonised shipping routes.