What are the busiest ports in India? 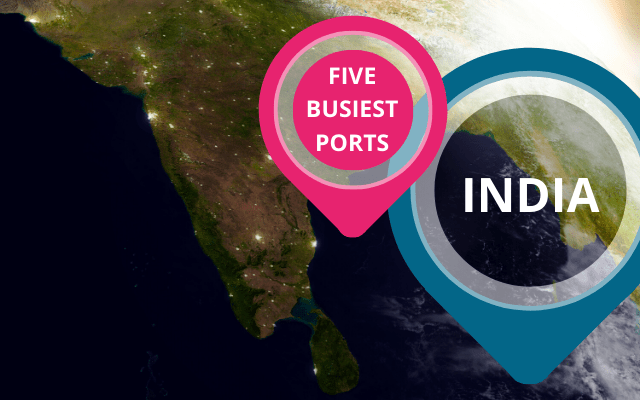 Asia is home to many of the world’s fastest growing economies and is an indispensable part of the global supply chain. What are busiest ports in India?

India’s 13 ports are critical to the country’s ambitions, the largest of which is the International North South Trade Corridor (INSTC), a major initiative to connect the Indian Ocean to trade Eurasian trade corridors and the Arctic.

Here at Port Technology International (PTI), we have compiled a list of the five busiest ports in India on TEU traffic alone.

The list below is accurate as of December 2018, with data taken from the World Shipping Council and India Ports Association.

The JNPT, also known as Nhava Sheva port, is the busiest container port in India with an annual traffic of 5 million TEU.

It is the only Indian port to be featured in the world’s top 30 and has seen a steady increase in its traffic for past five years.

It is responsible for 55% of India’s container traffic and will see its capacity almost double once its fourth terminal is completed in 2023.

However, it will be overtaken once the Vadhaven Port is operational. The Indian government approved the plans in early February 2020.

The Port of Mundra is the second busiest port in India and has an annual traffic of 4.4 million TEU. It has almost doubled its traffic since 2014, when it handled 2.7 million TEU.

Furthermore, it is India’s largest commercial port by size and acts as a major gateway to the hinterland of northern India.

It also has four container terminals and has a capacity of 7.5 million, which means it is being used at less than 50% capacity at present.

The Port of Chennai is the third biggest port in India and has an annual traffic of 1.5 million TEU. Its 2018 performance saw an increase of almost 3.5% on the previous year.

It has the honour of being the location for India’s first dedicated container terminal, which opened in 1983. It has since been privatised, with DP World being awarded the concession.

Its second container terminal opened in 2009 and is run by PSA International; on its own it has a capacity of 1.5 million TEU.

The Port of Kolkata is the fourth busiest in India and has an annual traffic of 796,000 TEU in 2018, a 3.2% increase on the previous year. It is also the only river port featured on this list.

It was the first major port in India and was a crucial trading post for the British East India Company, and the biggest port in the country.

Today, it acts as a vital gateway for the vast hinterland in Eastern India and neighboring landlocked countries, such as Nepal and Bhutan.

The V.O. Chidambarabar Port Trust is the fifth busiest container port in India and has an annual traffic of approximately 698,000 TEU.

It is the fourth largest container terminal facility in India by size and is set to see its traffic increase substantially once the Sethusmudram Shipping Canal is completed.

The project, which concerns the shallow waters between India and Sri Lanka, will make the area viable for mega-ships, which it currently isn’t.