The 5 biggest ports in Southeast Asia 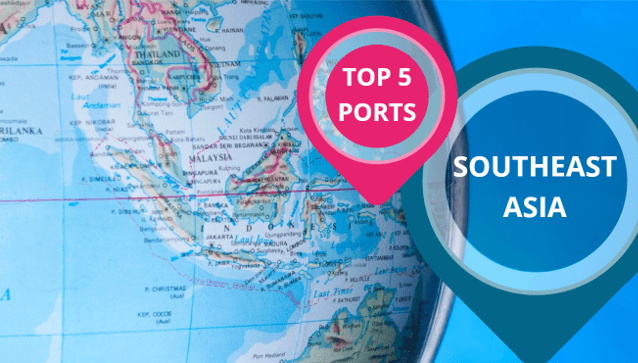 At Port Technology International (PTI), we’ve decided to ask the question: what are the biggest ports in Southeast Asia?

Asia has been the global economic engine this century and is home to some of the biggest ports in the world.

We are focusing specifically on Southeast Asia and have not included China, although we will compile an insight looking into the biggest ports in China in the near future.

This list has been compiled based on 2018’s TEU traffic but will be updated as and when 2019’s figures are announced.

The Port of Singapore is the biggest and busiest port in Southeast Asia and the second in the world after Shanghai.

It is the only port in this list to be among the world’s top 10.

In 2019 it carried 37.2 million TEU, an increase of 1.6% on 2018. The Maritime Port Authority (MPA) is currently in the process of building the Tuas Port, which will be the biggest port in the world with a capacity of 60 million TEU once it is completed in 2040.

Port Klang is the second biggest port in the Southeast region and is just outside the world’s top 10, with its traffic reaching 12.3 million TEU in 2018.

It is situated on west coast of the Malay Peninsular on the Malacca Strait, it is on one of the busiest shipping lanes in the world.

In May 2018 Westport, one of three major terminal operators at Port Klang, announced it had started buying land as part of its expansion plans, which will see development of four of its terminals.

The Port of Tanjung Pelepas is the third biggest port in Southeast Asia and one of the 20 biggest in the world, with approximate annual traffic of 12 million TEU.

It is Asia’s most technologically advanced port and has broken the vessel utilization record three times in a row, the most recent being in July 2019 when the MSC Gulsun, the biggest containership ever, called.

In October 2019 it announced plans to double its capacity in a move that will see it carry more than 30 million TEU by 2030.

The Port of Laem Chabang is the fourth biggest port in Southeast Asia and is just outside the world’s top 20 in the world.

It has an annual traffic of 8 million TEU and is home to Thailand’s most advanced container terminal, Terminal D, which was opened by Hutchison Ports in January 2019.

Once completed, Terminal D’s capacity will increase by 3.5 million TEU. In November 2018 it welcomed the largest vessel at ever call at Thai port, the ONE Columba.

The Port of Tanjung Priok, also known as the Port of Jakarta, is the fifth biggest port in Southeast Asia and just outside the world’s top 20, with an annual traffic of 7.6 million TEU.

It is the busiest and most advanced port in Indonesia, and handles 50% of the country’s transshipment traffic.

It is currently undergoing a major expansion to make it capable of servicing the biggest vessels in the world.

The project began in 2013 and will be completed by 2022, by which time the port will have seven new terminals capable of handling 18 million TEU, which on current levels will make it one of the eight busiest ports in the world.