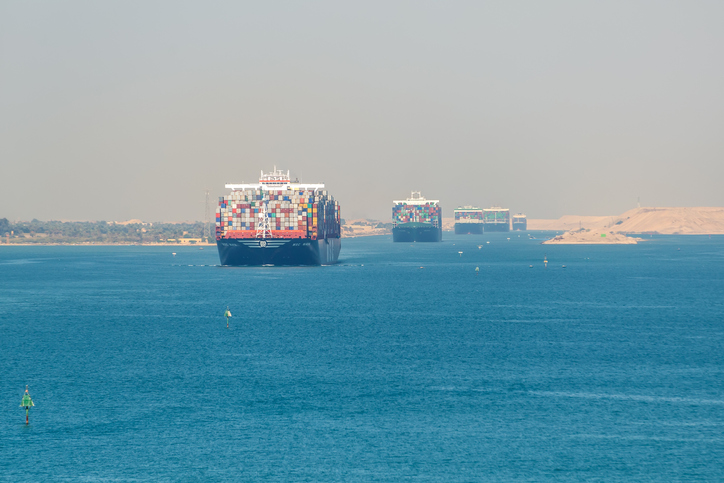 The blockade of the Suez Canal could cause a new congestion container port crisis as dozens of vessels wait for the passage to clear after a container ship ran aground in the waterway.

According to reports the vessel ran aground and is now blocking one of the narrowest parts of the canal.

Lars Jensen, CEO, Shipping Intelligence Consulting, wrote in an online update that the delay caused by a 20,000 TEU Evergreen vessel, the Ever Given, could hold up as much as 55,000 TEU a day from Asia to Europe.

“The current expectation is that it will take some 2 days to clear the canal which will cause the delay of 110,000 TEU of cargo,” Jensen said.

He explained that this will “cause a spike of cargo into the main ports in Europe” as congestion builds up in the continent’s main gateways.

“In other words, this increases the risk we will see port congestion in European ports one week from now.

“On top of that, it simultaneously delays the movement of 55,000 TEU of containers back to Asia per day – further adding delays to getting empty containers available in Asia.”

The potential ensuing congestion could mirror that seen on the US West Coast, which has experienced severe chaos and delay after China increased manufacturing production and began exporting again after COVID-19 restrictions were lifted.

It is not yet clear how the vessel ran aground, but reports suggest Evergreen Marine have blamed a gust of wind that blew it off course. The BBC quoted the carrier saying the “sudden strong wind” caused the vessel to deviate and accidently hit the bottom and run aground.”

The Suez Canal Authority (SCA) said it was using tug boats to move the vessel and that it had reopened its older canal in an effort to ease the congestion, but several attempts to refloat have reportedly failed.

The vessel was on its way to the Port of Rotterdam after it left the Port of Ningbo, China, on 4 March.