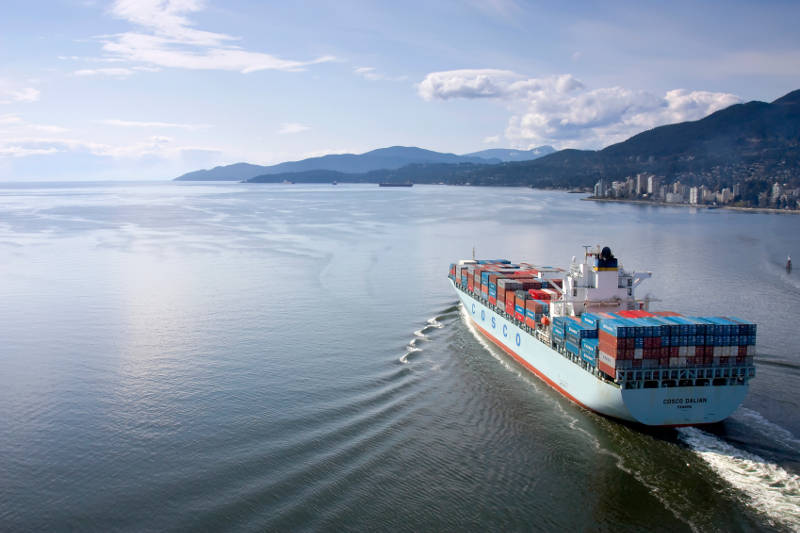 In the latest ‘Container Insight Report’ released by Drewry Maritime Advisors, the consultants ask how quickly other lines will follow the two alliances that have upsized ships on the Asia-US East Coast (USEC) route, ahead of the Panama Canal Expansion.

The 9,400-TEU Cosco containership 'Andronikos' will make the first transit of the expanded Panama Canal on Sunday June 26, 2016 and ahead of that two shipping alliances – CKHYE and G6 – have laid out plans to upgrade the size of ships used on the Asia-US East Coast via Panama route.

In November, 2016, Drewry wrote that it expected carriers to resist the urge to flood the trade with the biggest ships possible and that vessel upgrades will be incremental and in line with demand growth.

That prediction seems to have come true based on the immediate plans that have been communicated thus far.

However, the NYX service will replace two existing loops (NCE and the NYE/SCE Combo) that use ships of half that size, meaning the net increase in weekly nominal capacity will be negligible.

The CKYHE Alliance will make the biggest strides in capacity as it will upgrade three existing Panama services up to a maximum of 8,500 TEU, as well as re-routing a Suez service through Panama.

The CKYHE alliance will suspend one service (AWE2) using 4,500 TEU ships, with the forthcoming changes expected to increase CKYHE’s nominal capacity by nearly 14,000 TEU a week.

Based on the current projections, shippers won’t see any significant difference in the Asia-USEC via Panama trade after July, as the number of weekly services will remain at 14.

Technical Paper: Implications of Mega-ships on Ports and Terminals

The average size ship will increase by around 25% to 5,900 TEU, but that figure is still well short of the 13,000-14,000 TEU upper-limits the expanded Panama Canal will be able to accept.

There will be nine weekly services using the old Panamax size ships from July, which provides plenty of scope for further upgrades but with demand for US East and Gulf coast services slowing, Drewry maintains its expectation that carriers will only do so in stages.

Aided by the West Coast port labour issues at the start of 2015, container shipments from Asia to the USEC/GC surged by 16% in 2015, but the trend has reversed in Q1, 2016, with Asia-USWC rebounding by 6% with Asia-USEC/GC only managing a 1% rise.

In addition, there are physical restrictions that will prevent carriers from rushing in with the biggest ships, the most obvious being the ongoing project to raise the Bayonne Bridge that restricts access to the Port of New York/New Jersey and is not expected to be completed until 2017.

As long as the Bayonne Bridge is not raised, it will not be possible for 13,000 TEU ‘neo-Panamax’ containerships to operate from Asia to the US East Coast.

The G6 Alliance’s new NYX service will presumably call at the Global Marine Terminal that doesn’t require a transit under the Bayonne Bridge.

At present the average size of ship from Asia to USEC via Suez is around 7,900 TEU.

Drewry believe that another disincentive for carriers will be the shrinking freight rate differential that they are seeing for Asia-USEC services compared with Asia-USWC loops.

At the peak of the West Coast slowdown last year spot rates for 40ft container from Asia to the East Coast where as much as $2,800 higher than to the West Coast, according to Drewry’s Container Freight Rate Insight.

Since then spot rates on both legs have come down steeply and while EC rates remain about twice the price of those to the WC the differential is now lower than $1,000.

Another factor that needs considering is the pending alliance restructuring that will take place in April, 2017, assuming all regulatory approvals are granted.

The Drewry View: The direction of travel on the Asia-USEC via Panama trade is unstoppably moving towards bigger ships and fewer services, but the speed at which this process takes place will be restrained.