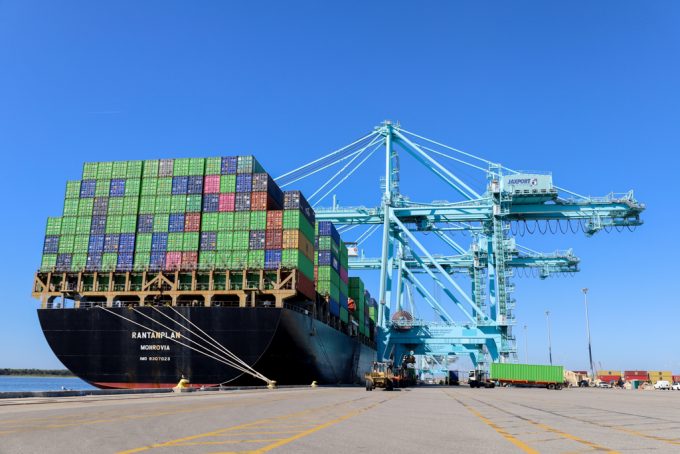 SeaLead is the only container ocean carrier to offer a direct Jacksonville port call as the first stop on the US East Coast from Asia.

JAXPORT presented the crew of the container ship Rantanplan with a maiden voyage plaque to commemorate the vessel’s inaugural visit to the SSA Jacksonville Container Terminal (JCT) at Blount Island on 16 October.

By the end of 2022, SeaLead plans to increase its sailing frequency into Jacksonville by making the AEC a weekly service. Currently, the AEC calls JAXPORT every two weeks.

“Our decision was quite easy to make Jacksonville’s port the first call on the East Coast as opposed to the last one out,” said SeaLead’s Managing Director of Americas Cas Pouderoyen.

“By coming to Jacksonville first, we know exactly when the ship will arrive and work because there’s no berth congestion. We provide customers with reliable service and a fantastic stevedore with SSA Atlantic, who can work the ship right away with fantastic turn times. It’s a tremendous performance all around.”

Serving as the first port of call increases SeaLead’s cargo volumes into JAXPORT and eliminates a week of transit time for Florida importers, offering one of the fastest transit times between the Southeast US and Asian ports.

The service also provides export capabilities for Florida businesses seeking to export their goods to the global economy.

“SeaLead has been a wonderful partner for us as we work to meet increased demand from importers and exporters looking to take advantage of Jacksonville’s efficiencies,” said JAXPORT Director of Ocean Carrier Development Joyssy Woody.

“We appreciate SeaLead’s dedication to growing their business here and look forward to the continued success of this partnership to benefit our customers and community.”

Three new eco-friendly cranes will arrive in February 2023, and $70 million in phased yard improvements are underway to enable the facility to accommodate more containers.

In June the JAXPORT Board of Directors has unanimously approved a long-term $62 million agreement with Blount Island terminal operator Trailer Bridge.