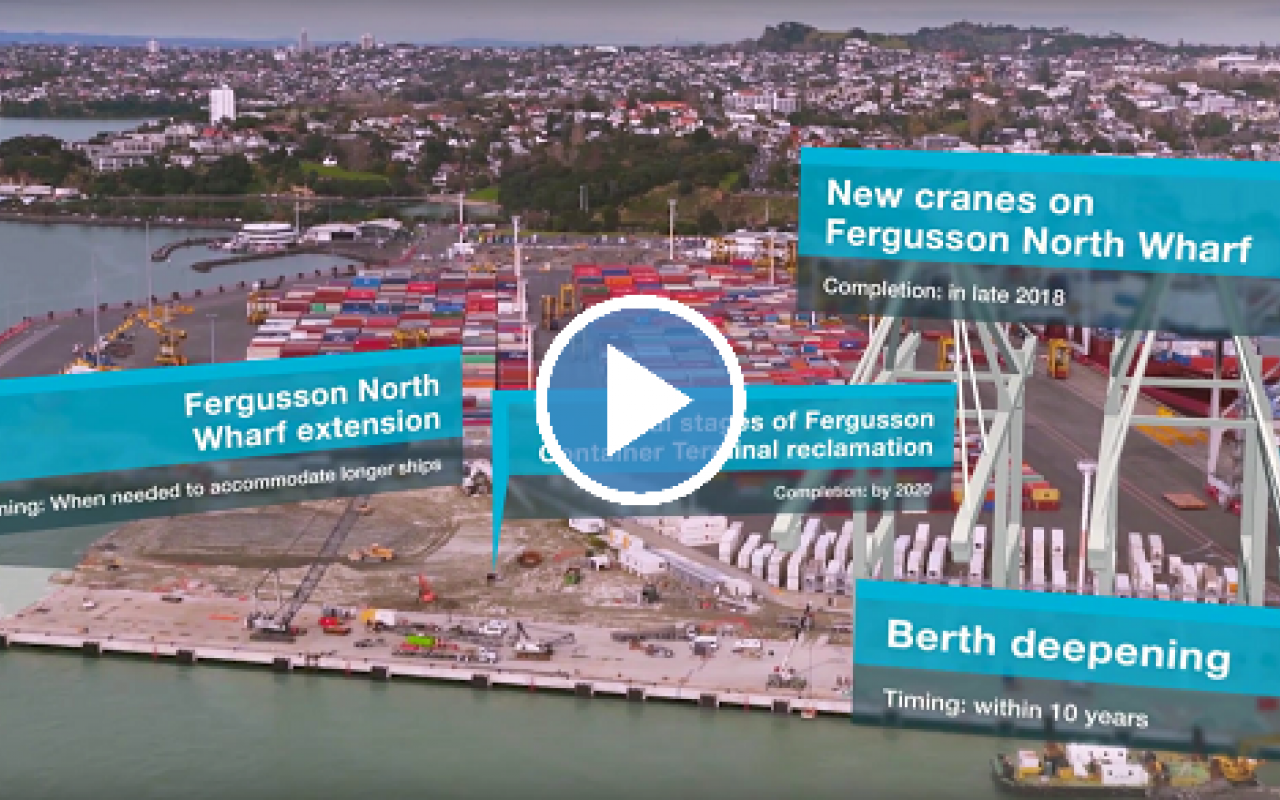 Ports of Auckland has released its Draft 30-year Master Plan to outline how a range of projects will be needed for the port to keep delivering for Aucklanders until its move.

The Master Plan Draft has partly addressed the issue by setting out how the port will automate its container terminal, develop a deep-water terminal berth and install three new cranes at Fergusson North Wharf, making it a “premium dedicated container facility”.

The cranes will provide several energy-saving features, including a 26-kilowatt solar panel array to offset electricity use, which will help Ports of Auckland to reach its net-positive energy goal.

Ports of Auckland’s container terminal will also become the first in New Zealand to use automated straddle carriers once they arrive in 2019.

But the Master Plan Draft stated that the machines will still drive between the port’s yard and ship-to-shore cranes as the work is “more complex”.

This will increase its capacity by a third.

The container terminal automation, plus the other projects on this site, will almost double Ports of Auckland’s capacity and handle enough containers to support an Auckland population of around 2.7 million.

But this work, along with other projects outlined in the Master Plan Draft, will provide Ports of Auckland with the added capacity that the container terminal needs to serve a population of up to 5 million – three times the number of people living in Auckland today.

The port’s owner, Auckland Council, is undertaking the project to find a new port location.

Tony Gibson, Ports of Auckland’s Chief Executive, has warned that the move could take decades due to the time constraints of finding a location, getting consent, and securing funding before construction begins.

Gibson said: “We also have a plan to increase berth space.

“We are proposing to build a new wharf running east-west along the north end of Bledisloe Terminal, in line with the recommendations of Auckland Council’s Port Future Study.

“It will be a piled structure in line with our commitment to no further reclamation, but it will reach an extra 13 metres north into the harbour.

“However, these 13 metres are essential to the success of the other wharf projects.

The port is also removing all of Marsden Wharf and part of a wharf known as ‘B1’.

This will bring three redundant wharves back into use and create almost a kilometre of new general cargo berth space.

When Fergusson North Wharf was designed in the 1990s, it was thought that a 300-metre-long berth would be more than enough for the likely increase in container ship size.

Back then, the biggest container ships calling at Auckland were only 250 metres long.

The biggest ships are now 300 metres long, and visits from even longer ships in the future are possible.

This means that the port’s shipping channel, which is 12.5 metres deep at low tide and around 15.5 metres at high tide, will need ‘tidal windows’ – so it can bring larger ships in on the high tide.

This is common practice at other ports in New Zealand and worldwide.

The Master Plan Draft stated that the port may need to deepen the channel by at least one metre and no more than two metres within the next 10 years.

This would involve removing high points from the channel and corners may need to be made wider.

The Master Plan Draft said: “If ships keep getting bigger, we may have to make Fergusson North Wharf longer by extending it 30 metres to the east.

“We’ll monitor shipping trends and ship sizes to determine if and when it should proceed.

“If we do proceed, we’ll engage with stakeholders before applying for consent.”

A project to increase the depth of several berths will also take place so that the port can accommodate bigger ships.

The Master Plan Draft added: “We currently have consent to deepen our three container ship berths to between 13.5 and 14.5 metres.

“We anticipate that in the future, we’ll need to seek consent to deepen our premium berth at Fergusson Wharf to 15.5 metres.

“We’ll also need to deepen some of our general cargo berths.

“We’ll only make these investments when needed.”

Read more: Ports of Auckland is ordering three new container cranes from Shanghai Zhenhua Heavy Industries (ZPMC) for delivery in late 2018 as part of plans to add automated processes to the terminal and almost double its capacity