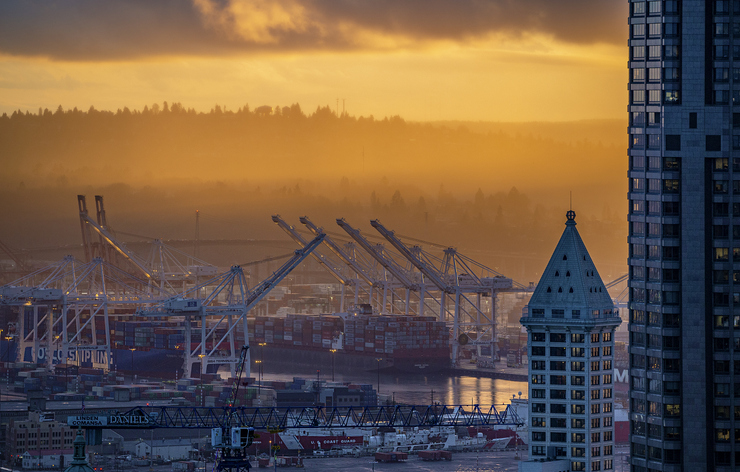 The ports of Seattle and Bellingham will receive federal grants worth $10 million and $7 million respectively through the U.S. Department of Transportation’s competitive Port Infrastructure Development Program (PIDP) to modernise container handling and supply chain infrastructure.

According to a statement from US Senator Patty Murray, the grants have been awarded following talks with US Transportation Secretary Elaine Chao and senior Department leaders about the importance of improving Washington state ports, which are critical to the regional economy.

The Port of Seattle’s grant will go towards four major transportation infrastructure upgrades at its Terminal 5, which are part of a larger modernisation effort. Once renovated, Terminal 5 will be capable of simultaneously serving two 18,000-TEU ships, some of the world’s largest container vessels.

Additionally, the improvements will effectively double the terminal’s capacity for refrigerated agricultural exports to over 170,000 containers per year, most of which originate from rural America—allowing shipping costs to be reduced and shortening the time it takes for U.S. agricultural producers and manufacturers to get their goods to market.

In fact, the Puget Sound Gateway—facilitated by the Port of Seattle—handles exports from all 50 states, and 60% of its import cargo is distributed beyond the Pacific Northwest.

“We’re all doing the best we can to stay safe during this uncertain time, but we can’t ignore the priorities that we know are critical to keeping our vital ports updated and healthy, and our state economically-competitive,” Senator Murray said about the grants.

“These awards are good news for future job-seekers, as well as growers and manufacturers from our state and across the nation who will benefit from upgraded port facilities and increased market access.”

“While I’m going to keep doing everything I can get families and communities in our state the support and relief they need to make it through this pandemic, I’m not going to stop pushing for the federal investments in infrastructure—and more—I know will be vital to our state’s recovery in the weeks, months and years ahead,” Senator Murray added.

“I am grateful to Senator Murray for her consistent focus on ensuring that the Northwest Seaport Alliance remains a premier gateway for Washington exports and international trade.”

“We are grateful for her support for the Terminal 5 project and also for leading the charge in Congress to reform the Harbor Maintenance Tax. She is truly a champion of Washington state ports—critical infrastructure that will be necessary to lead economic recovery during the COVID health crisis.”

The $6,854,770 to go to the Port of Bellingham will enhance the Port’s electrical and broadband infrastructure, as well as other repairs and upgrades that would allow the Port to accommodate larger ocean vessels with a wider variety of cargo and bolster its unloading capacity on dock.

When completed, the upgrades to the Port’s shipping terminal are expected to help improve safety at the Port, create family-wage jobs and boost the regional economy through increased trade and commerce—directly benefitting local fabricating and logging facilities, and a number of other Port-dependent businesses.