Gina M. Raimondo, Governor for Rhode Island, US has recently announced that the Port of Davisville had its sixth consecutive record breaking year for automobiles imported by ship in 2015.

The Port of Davisville has experienced 547% growth over the past 20 years.

Gina Raimondo included a US$70 million bond proposal in her state budget recently to modernise and reconstruct Pier 2 at the Port of Davisville.

The investment would solidify Davisville's position as the premiere marine commercial gateway to New England and add an additional 50 years to the pier's life.

It would also preserve hundreds of jobs in the maritime sector and keep Rhode Island competitive with other ports in the region.

Technical Paper: The Economic Contribution of Ports and Terminals

Raimondo said: “For a vision of what is possible in Rhode Island, we don't need to look any further than the Quonset Business Park. Here in North Kingstown nearly 11,000 people work at over 200 companies, including one of the top 10 auto importers in all of North America.

“The Port of Davisville is one of our state's most important assets and today's announcement is another example of how Rhode Island can be a leader on the global stage.

“We need to continue this momentum and pursue initiatives that will ensure the port continues to expand, creating even more economic growth and jobs in the future.”

There were more than 227,000 automobiles imported at the port in 2015, surpassing the previous year's record by more than 48,000 vehicles.

The amount of cars imported is now more than six times the volume seen at the port just two decades ago.

Vehicles arriving at the Port of Davisville are processed, finished and distributed across the US by North Atlantic Distribution (NORAD).

Michael Miranda, President and CEO of NORAD, said: “For more than 30 years we have called the Port of Davisville our homeState and federal leaders have done an incredible job in positioning this Port for more growth.

“We recognise their commitment to this unique asset, and we will continue to invest here and bring more jobs to Rhode Island for many years to come.”

The Port of Davisville has been one of the Top Ten auto-importers in North America for the past several years.

US Senator Reed, the Ranking Member of the Appropriations Subcommittee on Transportation, Housing and Urban Development, said: “Success at Davisville didn't happen overnight. We are breaking new records today because of investments we started making decades ago.

“Now we have to continue making smart, strategic infrastructure investments in the future.” 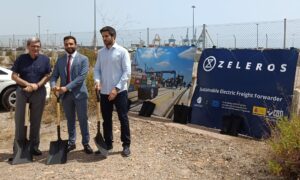