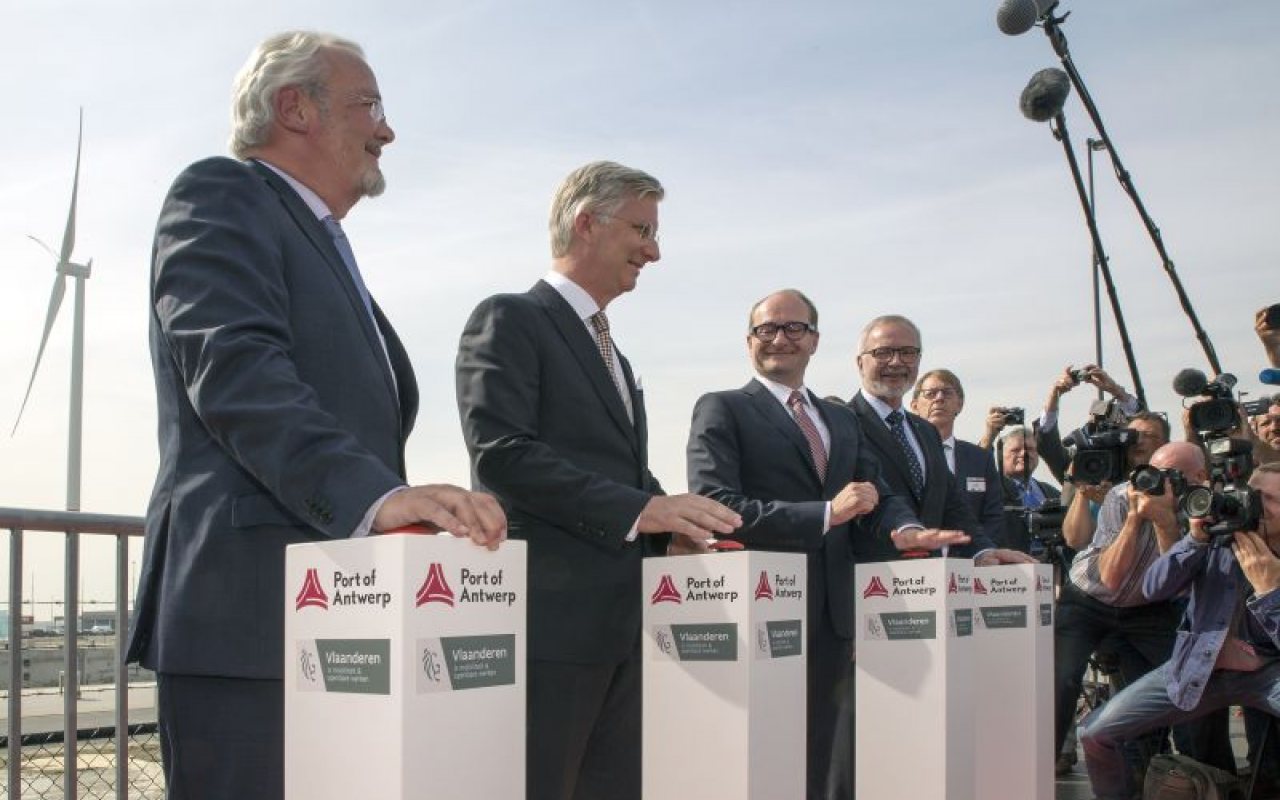 King Filip of Belgium, minister Ben Weyts, the chairman of the European Investment Bank Werner Hoyer and alderman Marc Van Peel of Antwerp, in charge of port affairs, have officially inaugurated the biggest lock in the world.

The Kieldrecht Lock has a price tag of US$430 million and ensures smooth access to the Waasland harbour.

The Kieldrecht Lock strengthens the competitiveness of the Port of Antwerp and will attract new economic activity to Flanders.

The Grande Lagos of shipping company Grimaldi was granted the honour of entering the brand-new Kieldrecht Lock as the very first ship.

With a length of 500 metres, a width of 68 metres and an operational depth (TAW) of 17.8 metres, the biggest lock in the world can accommodate the largest seagoing vessels.

The Maritieme Toegang (maritime access) of the Department of Mobility and Public Works, together with the Port Authority of Antwerp and a building consortium, had been building the Kieldrecht Lock for almost five years, making the project one of the biggest Flemish works in the past few years.

The Kieldrecht Lock enables smooth access to the Waasland harbour in Antwerp.

The Kieldrecht Lock now enables a second, bigger, more upstream access to the docks on the left bank of the Scheldt river. In future, the ships can expect faster and smoother access to the harbour.

The government of Flanders and the Port Authority of Antwerp had together invested to realise the Kieldrecht Lock, with Flanders contributing 75% of the investment costs.

Ben Weyts, Minister of Mobility, said: “The Kieldrecht Lock will give shipping companies an additional reason to choose Flanders. We will strengthen the international competitiveness of the Port of Antwerp and attract new economic activity to our region. Our Flemish ports can offer the whole world fast, punctual and smart services.”

Marc Van Peel said: “The Kieldrecht Lock forms a necessary key to the further development of the port on the left bank of the Scheldt River. In recent years, our port had successfully overcome many hurdles, now ranking as number two in Europe.

“In order to retain that leading position, Antwerp must have a highly necessary basic infrastructure such as well-functioning locks that are adapted to the increased scale of international shipping.

“However, Antwerp also needs space to grow, which explains the first phase of the construction of the Saeftinghedok – a new tidal dock on the left bank of the Scheldt river – the next infrastructural project that is high on the agenda.”

The Port of Antwerp as a main port is an important junction in the Trans-European Transport Network (TEN-T). Through the TEN-T network, Europe wants to promote sustainable transportation, job creation and economic growth and the cohesion within the European Union.

Dr Werner Hoyer, President of the European Investment Bank, said: “The Kieldrecht lock symbolises some of the goals of a Union seeking more growth, competitiveness and jobs. As Europe is slowly stepping out of the economic crisis and so as to make sure that our single market and international trade prosper, we need a connected Union, without barriers, with efficient, viable and sustainable transport infrastructure and networks.”