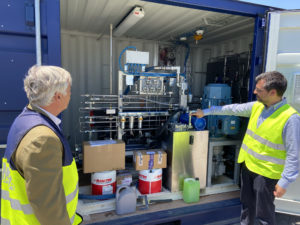 Hydrogen loading tests will begin this January from the Port of Valencia’s Hydrogen Generator located on the Xità quay.

This procedure, which is being carried out for the first time, will be supervised by technicians from Valeciaport, the National Hydrogen Centre, and the company Carburos Metálicos.

The components and systems that make up the hydrogen generator at the Port of Valencia will be tested specifically throughout the month using substances including nitrogen, helium, and hydrogen.

The container stacker and four-by- four tractor unit prototypes that will start operating at the Valencian enclosure this year will be supplied with hydrogen as a result of this loading test.

The hydrogen supply station (HRS) has been designed and built by the National Hydrogen Centre.

It will include a fixed part which will be dedicated to the reception, storage and compression of hydrogen up to delivery pressure (both installed in the Bracet de la Xità or Gità).

It will also have a mobile part which will store the compressed hydrogen and include a dispenser of this fuel for refuelling the port machinery.

The operating process of a hydrogen station is similar to refuelling conventional vehicles, except that, in this case, the hydrogen is supplied at high pressure.

This refuelling station will supply fuel to the machinery that forms part of the project being developed by Valenciaport.

One piece of this equipment is the Reach Stacker vehicle prototype or container stacker, which will be tested at MSC Terminal Valencia and run on this energy.

The other piece of machinery will be a modified version of a typical four- by-four tractor unit with a fuel cell that will be tested during loading and unloading activities at Valencia Terminal Europa of the Grimaldi Group.

The equipment will arrive in the first quarter of the year and will enable testing the use of hydrogen in the terminals for two years.

This initiative is part of H2Ports and it is coordinated by the Valenciaport Foundation in close collaboration with the Port Authority. Moreover, the initiative is financed by the Clean Hydrogen JU programme of the European Union.

Its main objective is to test and validate hydrogen technologies on port machinery that will provide applicable and real solutions without affecting the performance and safety of port operations and producing zero local emissions.

The H2Ports project will involve a total investment of more than €4 million ($4.25 million).