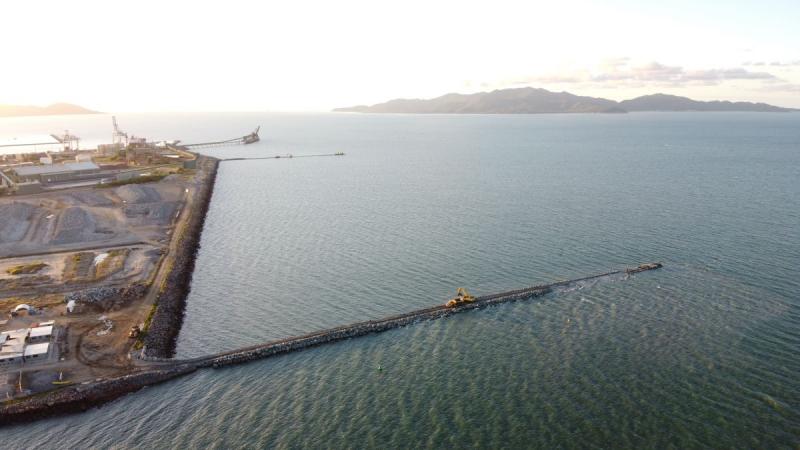 The Port of Townsville’s $132.3 million (AUS$193 million) Channel Upgrade Project has reached a milestone, with the delivery of more than half of the total rock required to build a protective sea wall.

According to a statement, over 375,000 tonnes of rock has now been supplied to the port to build the 2.2-kilometre sea wall that will eventually reclaim an additional 62 hectares of land for port operations.

More than 70 port staff, rock supply and construction employees are involved in building the rock wall, and more than 10,000 project hours have been completed so far.

Part of the City Deal, the sea wall is the critical first phase of a project that will eventually widen the approach channel to the port, allowing ships of up to 300 metres in length to visit Townsville.

Federal Minister for Population, Cities and Urban Infrastructure Alan Tudge said the Port upgrade had created a jobs and economic boost for Townsville.

“It’s fantastic to see the the rock wall powering ahead at a time when Townsville, like the rest of the country, needs an economic injection,” Mr Tudge said.

“Off the back of the City Deal, getting work underway on this project is crucial to the Morrison Government’s priorities  as we rebuild the economy during COVID-19.”

The Australian Government is contributing $75 million to this project as part of the Townsville City Deal, which will see the biggest improvement to the port in several decades.

Queensland Treasurer and Minister for Infrastructure and Planning Cameron Dick said construction of the sea wall is an all-Queensland affair that will deliver far-reaching economic benefits for Townsville.

“The Port of Townsville is a key economic gateway for the wider Townsville region and our investment will ensure the entire North Queensland economy can benefit now and into the future.”

Federal Member for Herbert Phillip Thompson said he was pleased with the progress being made on the sea wall.

“We know Townsville has been doing it tough in recent years, but seeing the sea wall extend into Cleveland Bay is a visible reminder of the progress we’re making in the economic recovery of the city,” Mr Thompson said.

“We’re working to invest money in Townsville and back key projects that will create jobs and drive the economy – just like this channel upgrade.”

State Member for Townsville Scott Stewart said the Port of Townsville was hugely important for the region.

“It is a vital piece of infrastructure that drives economic growth and generates jobs,” Mr Stewart said.

“The upgrade will help the port increase its capacity which is important for many sectors of the North Queensland economy.”

Construction of the wall will be completed early next year, with dredging to widen the channel beginning immediately thereafter. The dredge material will be used to reclaim the land area created by the wall.