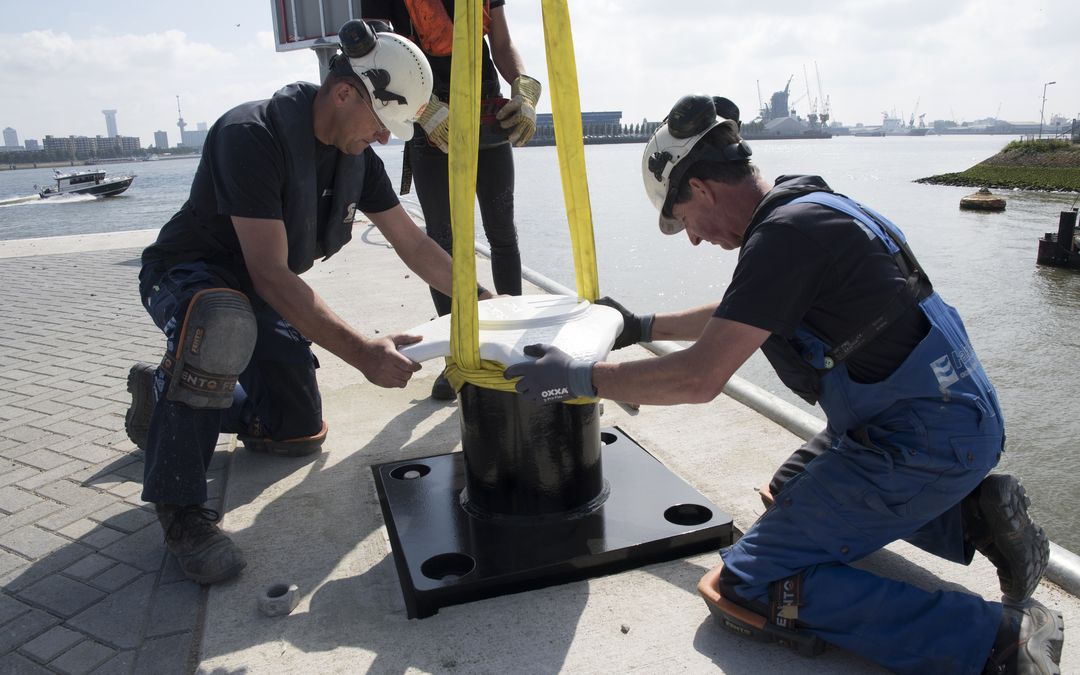 Port of Rotterdam Authority has announced the installation of the world’s first 3D-printed steel bollards on the new quay in the Sleepboothaven at Rotterdam Heijplaat.

The 3D printing of bollards is part of the infrastructure innovation programme launched by the Port Authority to improve and increase sustainability in the manufacture and use of quayside hardware through scientific research, innovation and digitisation.

The Port Authority developed the bollards with RAMLAB. They were printed at RAMLAB’s RDM site using a technique called Wire Arc Additive Manufacturing (WAAM), which involves the robotic welding of layers deposited on top of each other to form a 3D shape.

“This year we are printing the first bollards, which is a useful test case that shows that you can produce small series relatively quickly when compared to casting and importing the parts from China.”

Traditionally, the Port Authority’s bollards were always made from cast steel to a set design.

By applying 3D printing technology, bollards can not only be made faster, but they can also be made closer to the location where they are to be installed, which helps make production more sustainable.

The results of external testing show that the new bollards are of at least the same quality as cast steel ones. Eventually, the original shape of the bollards will be redesigned to ensure that in future they will be stronger and more durable.

The eleven 3D-printed bollards are to be installed on the new quay in the Sleepboothaven and will be used to moor vessels for Broekman Project Services.

RDM Rotterdam at Heijplaat, where Sleepboothaven is also located, is an incubator for the innovative manufacturing industry, where students, the business community and science work together to build the port of tomorrow.

The Sleepboothaven was in need of renovation, the Port Authority said. As part of its refurbishment, various innovative, sustainable building concepts are being applied.

For example, the quay wall was finished using precast concrete barrier elements that were installed without the need for a cofferdam.

This reduced the construction time, which meant less inconvenience for the neighbourhood’s businesses.

The Port Authority said it sees the 3D printing of bollards as one step in the process of acquiring knowledge and experience of the potential this technology is set to bring.

The next step will be to investigate the possibilities that 3D printing opens up for hydraulic engineering.

One option worth considering might be to develop a system of on-site 3D printing, which would allow on-site repairs to be carried out on nautical objects such as bollards and mooring posts.

Joppe Burgers, Project Engineer at the Port of Rotterdam Authority, said, “We are working with other companies based here in the port on developing and testing the possibilities offered by emerging technologies.

“This will create an innovation and research incubator, in which together we can build the port of tomorrow.”