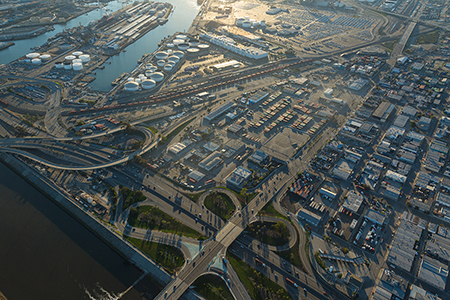 The Port of Long Beach has reached the permit and private land acquisition phase as part of transforming its Pier B rail yard into a high-tech on-dock rail support facility.

Last month, the $1.5 billion project which will enable the port to move more cargo by train received final federal approval from the US Maritime Administration (MARAD).

The next steps include securing two coastal development permits, from Los Angeles and California Coastal Commission, for which the port’s applications are pending.

The Port of Long Beach is also now able to move forward with acquiring multiple privately owned properties to assemble acreage for expanding the rail facility. All are either industrial or commercial, and the process includes relocation assistance.

Long Beach had recently finalised the state-required environmental impact report, involving communication efforts to Wilmington residents and businesses and Los Angeles city officials about the portion of the existing rail yard already located within LA and plans to expand it.

According to the port, now that the project has cleared the federal environmental review process, it can move swiftly from design stages to reality.

“This milestone unlocks our access to federal funding and allows our Board of Harbor Commissioners to address the remaining local decisions needed to break ground on this critical link for expediting cargo by rail between the Port and major markets nationwide,” said Port Executive Director Mario Cordero.

The project centers on a full-service staging facility for allowing trains up to 20,000 feet long — almost 4 miles — to be assembled or broken down safely and efficiently.

It also includes dedicated space for servicing locomotives and rail cars and streamlining feeder tracks to the Alameda Corridor, the superhighway for freight trains moving through metropolitan Los Angeles and connecting the San Pedro Bay ports with rest of the country.

Plans call for the project to be built in 12 segments, starting with the design, contracting and construction of the first five stages from 2023 to 2026.

The entire facility is expected to be completed by 2032, and upon completion will more than double the size of the existing yard, growing it from 82 acres to 171 acres. It will add more than 130,000 feet of rail, quadrupling the number of tracks from 12 to 48 sets: two main lines, five arrival/departure tracks, and 41 tracks throughout the yard for staging, storing and repairs.

In the coming weeks, the Board of Harbor Commissioners will be asked to consider the project’s budget. In February, they were advised the $1.547 billion price tag represents an 80 per cent increase from the 2018 estimate.

Steven Neal, Harbor Commission President, added: “Years of planning, studies, community outreach and collaboration with numerous stakeholders have gotten us to this juncture.”

“The Commission is looking forward to considering the detailed designs, right-of-way decisions and construction recommendations for a consequential project that will strengthen our nation’s freight network and Long Beach’s standing as a world-class, competitive port.”

The Port of Long Beach recently received a $52.3 million grant from the US Department of Transportation’s Maritime Administration (MARAD) to help fund the development of this project.