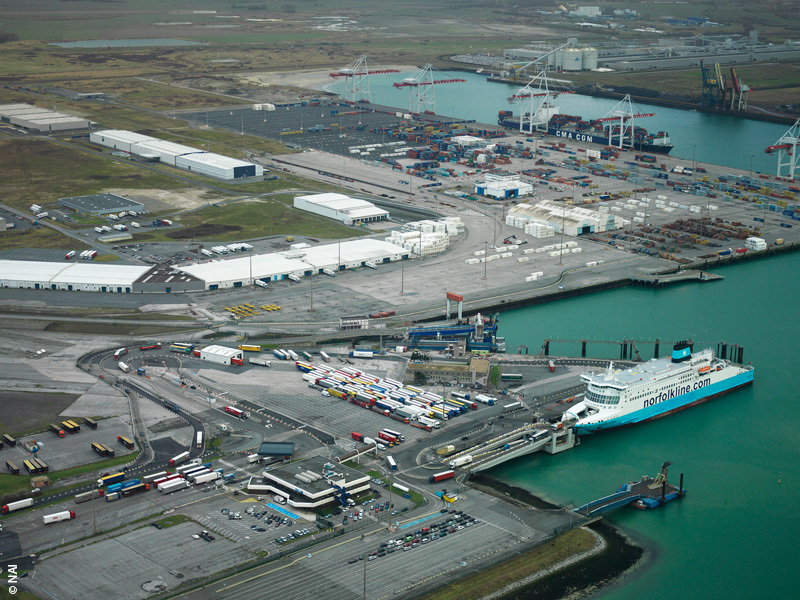 The Port of Dunkirk is prepared to ramp up its efforts in 2021 after a bumpy 2020 which saw starkly different realities for traffic across various sectors alongside the challenges brought about by Brexit.

As with many ports, the Port of Dunkirk saw traffic fall during 2020 because of the COVID-19 pandemic. However, container throughput rose for the tenth consecutive year.

Port officials reported that total traffic dropped by 14% across all cargoes which represented 45.2 million tonnes (MT) for 2020, compared with 53.6 MT for 2019, during a press conference on 14 January.

Emmanuelle Verger, Chair of the Board of Trustees at the Port of Dunkirk, said the situation reminded her of “the economic crisis [of 2008/2009] but, overall, it is not the worst [traffic] we have ever had.”

Verger also noted that all the port operations continued throughout 2020 with measures set up to guarantee all activities continued and staff were safeguarded against COVID-19.

Container throughput has increased by 130% over the past ten years, according to the Port’s figures, and 2020 saw a modest increase of 2%. Last year it processed a record total throughput of 463,000 TEU.

The container terminal is operated by Terminal des Flandres. In 2010 Terminal Link, a subsidiary of CMA CGM, took a majority stake with 91% ownership and the Port of Dunkirk with the remaining 9%.

On 3 April 2020 the container terminal received two new gantry cranes designed to operate with the largest container ships in the world. The Port said it is expecting the arrival of the CMA CGM Jacques Saadé on 21/20 January, a 23,000 TEU LNG-powered vessel.

Growth of the container throughput would not have been possible without Terminal Link and the help of CMA CGM, said Daniel Deschodt, Acting CEO and COO at the Port.

It was noted that the container traffic would likely have been higher if it had not been for the impact of COVID-19.

Other good news came from the grain sector which saw traffic increase by 63% on 2019 figures to a total of 3.3 MT.

However, conventional and other general cargo decreased by 50%, in part this was due to the drastic decrease in exports by the automotive sector.

Brexit was another challenge for the Port to overcome in 2020 because of the Port’s proximity and trade links with the UK,.

In total freight throughput increased by 4% in 2020 to a total of 607,000, this can be attributed in some instances to overstocking because of Brexit worries.

Deschodt said “we were well prepared” for the UK’s departure from the European Union (EU) on 1 January 2021.

However, he did note that the end of 2020 was “complex” because of the EU decision to shut down its borders to people entering from the UK because of a new COVID-19 variant detected in the UK. This was particularly difficult for the truck drivers who found themselves stranded in the UK.

In the third quarter of 2021 the Port intends to open a new border control facility which allows both British and French Forces to have offices. This has come at a total investment of €4.85 million.

In terms of trade routes with the British Isles, Containerships, part of CMA CGM Group, has launched a new short-sea link between Dunkirk and Bristol/Liverpool.

“We are crossing our fingers it will be a great addendum to the cross-channel service,” said Deschodt. The first stopover is scheduled for 29 January 2021.

Deschodt also highlighted a new Irish Ro-Ro service with DFDS Ferry which will see the freight and non-accompanied trucks travel between Rosslare and Dunkirk.

The route provides exporters and transport companies with a direct, paperless, journey for trucks between the Republic of Ireland and other countries of the EU, implying lower costs, less waiting time as well as the possibility of avoiding the customs procedures which now apply to transport via the British landbridge.

The landbridge refers to the route that, prior to Brexit, connected the Republic of Ireland to the rest of the EU via mainland Britain’s road and ports network.

In addition, in October 2020 a new containerised Irish service between Dunkirk, Cork and Dublin was launched. Containerships began the new weekly service on 19 November 2020. This is also set to avoid the landbridge.

“We are expecting an increase in traffic if the cross channel traffic remains at the 2020 level and expecting that there will be more passengers on these lines. It will be the end of COVID that will help us develop with the British Isles,” said Deschodt.

Overall, across all traffic areas, traffic totals 17 MT between Dunkirk and the British Isles.

“We want to be positioned as an essential partner of the UK as the first client and customer of western europe,” Deschodt said.