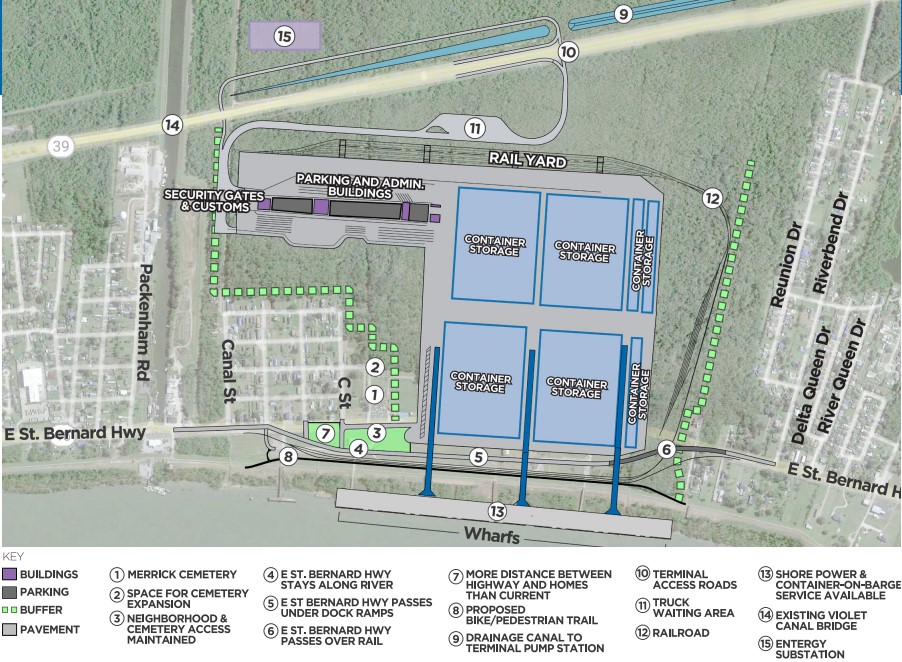 The Port of New Orleans (Port NOLA) has announced progress on the Louisiana International Terminal including investments in sustainability and a new terminal design.

Port NOLA revealed the new design for the Louisiana International Terminal that incorporates community feedback gathered over the past two years.

The $1.5 billion container facility on the Lower Mississippi River will serve larger vessels coming online in the container industry.

The terminal, located in Violet in St. Bernard Parish, is undergoing a multi-year design and permitting process, with construction slated to begin in 2025 and the first berth to open in 2028.

The Louisiana International Terminal will be equipped with shore power, allowing vessels to connect to onshore electricity and to turn off diesel engines while at dock.

Shore power can eliminate up to 98 per cent of ship-related emissions, vastly reducing the environmental footprint of a maritime terminal.

Operators will also be investing in a largely electric fleet of equipment. Port NOLA is working with Entergy Louisiana to develop an onsite substation to provide the electricity needs for the terminal.

The terminal will be designed to grow container-on-barge services, which move containers up and down the river by barge rather than road or rail.

Port NOLA is finalising negotiations with investors in box terminals at the facility.

“Not only does container shipping deliver goods to our grocery stores and packages to our doorsteps, but it’s also how Louisiana manufacturers and agricultural producers get their products to market,” said Port NOLA President and CEO Brandy D. Christian.

“If our state is to remain in the container shipping business—and to retain exports and grow imports—we must build the Louisiana International Terminal.”

“One of the benefits of building a new terminal from the ground up is that we can implement the latest advances in green technologies,” said Christian.

“And with air quality and noise common concerns that came up in our community outreach, I’m pleased to share our partners’ early commitments to sustainability.”

The St. Bernard Transportation Corridor, which will connect Lower St. Bernard to the interstate system and serve the terminal and the public, has received a $50 million commitment in funding from the Louisiana Legislature and has been added to the Metropolitan Transportation Plan.

Last week, the state released $2 million of the funds for the Regional Planning Commission to conduct a feasibility study on the corridor, which will begin in the coming months.

The updated layout also includes more buffers to separate neighbourhoods from the terminal, an overpass for cars to avoid a rail track crossing, space for the Merrick Cemetery to expand, and space for a Parish-planned bike and pedestrian path along the levee.

To address drainage concerns, the more detailed plan includes a system of pumps, canals, and an onsite pumping station that will be managed by the Port, lessening the current drainage burden on the local government.

The project is at the beginning of a federal permitting process required under the National Environmental Policy Act, or NEPA.

This involves studies on topics ranging from traffic and cultural resources to wetlands and air quality.

The U.S. Army Corps of Engineers, which oversees the process, will analyse the results from those studies and decide if it will issue permits for construction.