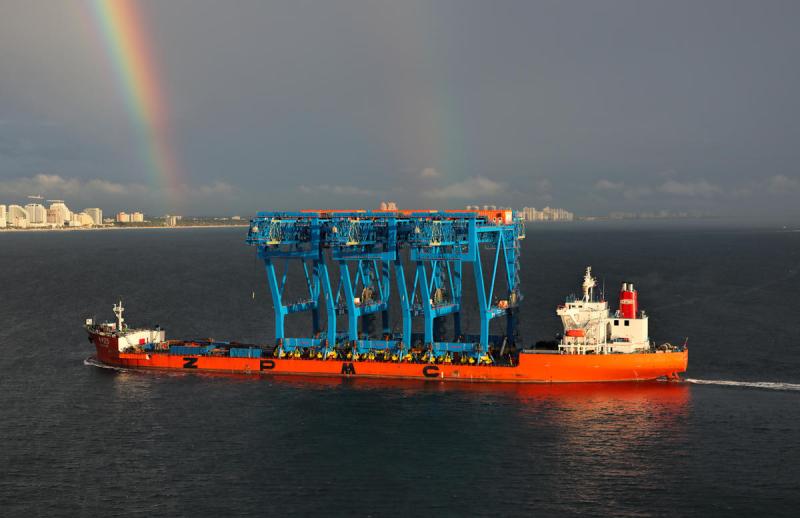 “The state-of-the-art cranes are pivotal to allowing our customers to grow their businesses in Broward County so that they can compete in the global marketplace,” said Port Everglades Chief Executive and Port Director Jonathan Daniels in a statement.

“The advantage is that the extended reach of the cranes enables customers to work larger ships and gain economies of scale, thus making Port Everglades more competitive.”

The three 175-foot (53 meters) high Super Post-Panamax container gantry cranes, valued at $13.8 million each, have the ability to handle containers stacked eight high from a ship’s deck and reach 22 containers across the ship’s deck.

Port Everglades’ existing seven gantry cranes in the Southport area, where most of the containerized cargo operations takes place, are only 151-feet high and limited to containers stacked six high and can reach across 16 containers.

Shanghai Zhenhua Heavy Industries Co., Ltd. Inc. (ZPMC) designed and manufactured the cranes as special “low-profile” models that extend out rather than up to avoid the flight path of Fort Lauderdale-Hollywood International Airport (FLL), which is less than two miles away.

They are reportedly the largest low-profile container gantry cranes ever designed and built. Port Everglades has an option to buy three more of the same cranes.

In addition to purchasing the new cranes, the seven existing low-profile Post-Panamax gantry cranes in Southport will be upgraded to a lift capacity of 65 tons from the current 46.5 tons that will add the capability to perform twin-picks (lifting two containers at a time).

All the cranes are being fitted with lighting that reduces the impact on nesting sea turtles by using lower light levels and limits the amount of light that spreads on the ground.

The new cranes are part of the largest expansion project in the Port’s history, which includes lengthening the Southport Turning Notch from 900 feet (274 meters) to 2,400 feet (731.5 meters) to allow for up to five new cargo berths which will add about 730,000 TEUs (the industry’s standard volume measurement of 20-foot equivalent units) to the Port’s capacity.

Construction for the $471 million project is ongoing and expected to be complete by late 2022. The Southport Turning Notch Extension project is anticipated to support an estimated 3,045 construction jobs and 5,529 direct, induced and indirect local/regional, according to a study produced by nationally recognized maritime research firm Martin Associates.

Port Everglades is also working with the U.S. Army Corps of Engineers to deepen the Port’s navigation channels from 42 feet to 48-50 feet and to widen narrower sections of the channel for safe vessel passage.