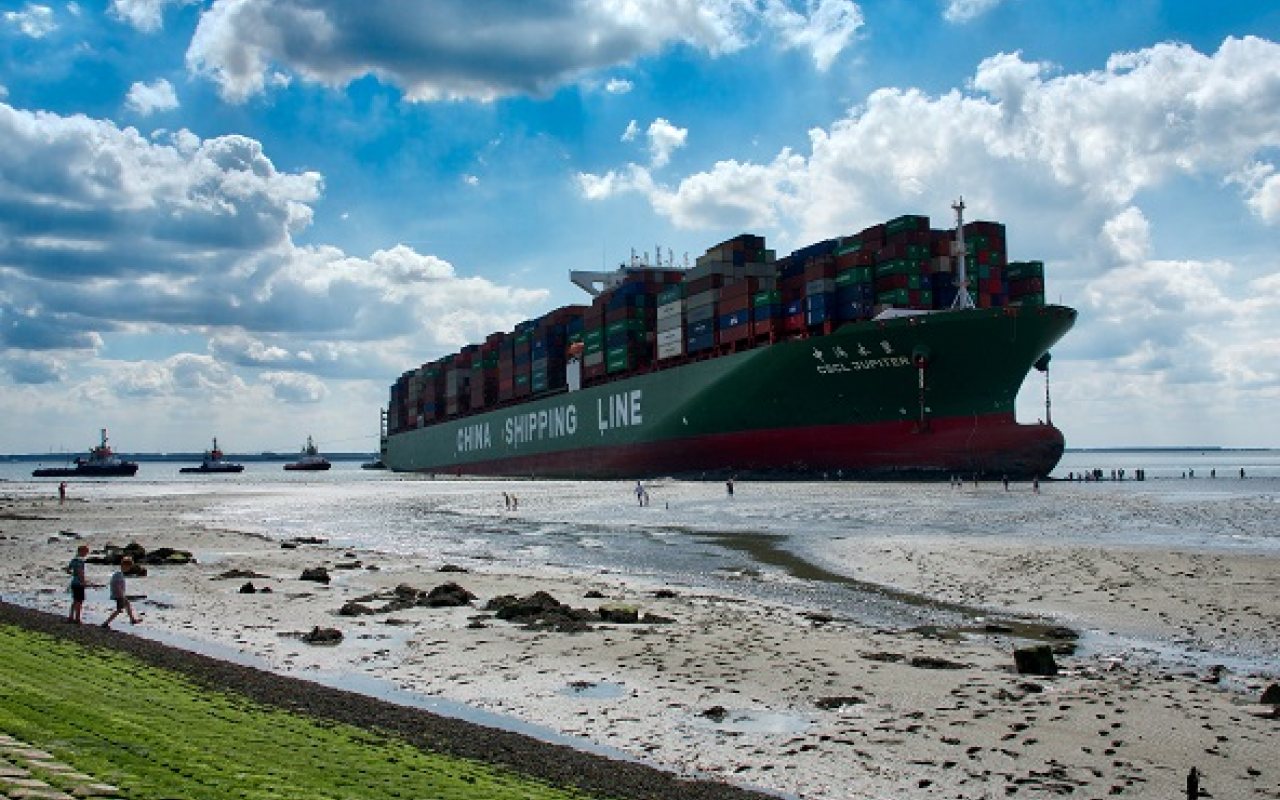 Anton van den Aarssen, from the Netherlands, is a happily married 58-year-old prog rock enthusiast with a passion for snapping ships.

He spends a lot of time at the Rilland-Bath on the Westerschelde, near the Port of Antwerp, which became the focus of a lot of media attention last year when a China Shipping Container Line vessel ran aground.

Luckily, Anton was there to capture the incredible scene (pictured above) as people and press flocked to the site of the accident.

In an exclusive interview with Port Technology, Anton (pictured below) explains what drove him to brave the wind, rain and even thunderstorms in order to capture his most impressive photos of some of the largest ships in the world.

Why did you start photographing ships?

About five years ago, when my wife and I went walking along the coast in Holland with a camera, I saw several ships passing by on the Westerschelde.

I became increasingly fascinated by the juxtaposition of large, industrial vessels and the natural environment.

Ships would appear on the horizon about 25 kilometres from where I was standing and within half an hour they were just 150 meters away.

As the ship passes you, it has an elegance such as that of a swan; graceful but striking due to its immense size.

My flare for photography is not only fuelled by my fascination in ships, but also the environment in which they sail.

I took this photo in the summer of 2017 at the Maasvlakte II in Rotterdam.

It is one of my favourites due to the immense boulders and the beautiful, lightly veiled blue sky.

On the horizon, the 400-metre-long Maersk Maren is loaded with thousands of colourful containers.

Despite its industrial character, the super-sized ship becomes a playful and cheerful object in the natural environment.

This photo of a Maersk ship in the sunset, shot in December 2017 in Rotterdam, presented me with a challenge when I was capturing it due to the light reflecting off the ship.

However, my patience paid off as it resulted in a nice ambiance.

Because of the Netherland’s northerly wind, the air is always nice and clean, which creates beautiful colours in the sky.

I managed to catch a colourful CMA CGM ship in in favourable light conditions as it arrived in Rotterdam, but, 10 minutes earlier, the cloud was blocking the light from reaching the sea, so I was very lucky with this one.

This is probably one of my best photos so far.

The large, 400-metre-long MSC containership suddenly becomes very small when you see the force of nature.

Many people say that capturing this ferocious but beautiful mix of volatile clouds, sunbeams and thunderstorms was a ‘lucky break’, but I had to take hundreds of photos in order to capture the lightning.

It was a personal challenge for me as I really do not trust thunderstorms, but the reward for facing my fear was well worth it.

These two photos show you what an incredible, ever-changing force the sky is.

The environment around the container ship, although shot from different angles with less than a minute of time difference, completely changes.

Most people will remember this scene as the accident that made the news all over the world.

It just so happened that it took place at my favourite photography spot.

The turn at Bath on the Westerschelde near Antwerp became famous when a technical defect caused the crew to lose control of the ship and end up running aground.

Although quite a serious matter as ships were blocked from reaching the port, the image of the vessel circulating the web caught a great deal of interest as it allowed people who may not have understood the size of these ships to gauge how large and impressive they are.

The ship was able to set off again later that day with the assistance of tugs and the rising tide.

These two pictures are of one of the largest containerships in the world, the Maersk Madrid.

I enhanced the clouds, sunbeams, and other features of the photos over many hours to accentuate the beauty of the photo.

This was shot from a nature reserve close to Antwerp.

I’m very fond of such photos as they present a comprehensive view of the environment and the container ship, which is still the central focus of the photo.

There is a beautiful depth to this photo as the Maersk MC-Kinney Moller separates Rotterdam’s industrial zone from a small beach in the foreground, with the extra dimension of a smoking chimney and, as an extra surprise, a thin sun.

I don’t believe any of these are my best photo as my mind doesn’t let me think that way. I’m constantly hunting for the perfect scene.

Here are some of his recent snaps: