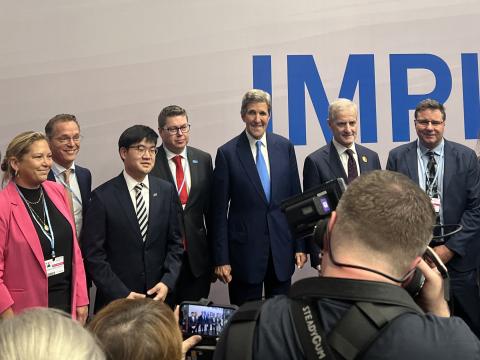 The NWSA announced its newest decarbonisation effort as part of the Green Shipping Challenge (GSC) at the 27th Conference of the Parties (COP27) to the United Nations Framework Convention on Climate Change held in the Egyptian city of Sharm el-Sheikh.

The GSC is a new initiative by the United States and Norway to highlight global actions and steps being taken to decarbonise the international shipping industry.

As part of this launch, the U.S. State Department invited the NWSA to partner on a feasibility study of a potential green corridor between Seattle-Tacoma and Busan, South Korea.

Over the next year, this study will include experts from three US national labs, the Maersk McKinney Moller Center for Zero Carbon Shipping, and staff from the two cargo gateways exploring the creation the green corridor, including potential sources of alternative ship fuels, and existing and potential future fuelling infrastructure.

Commissioner Sam Cho travelled to the convention to announce the NWSA’s participation in the Green Shipping Challenge Announcement and advocate for further decarbonisation efforts across the maritime industry.

Commissioner Hamdi Mohamed will join the second half of the conference to continue these efforts and discuss the green corridor in greater detail.

“It was an honour to announce the NWSA’s participation in the Green Shipping Challenge alongside world leaders and U.S. Special Presidential Envoy for Climate John Kerry,” said NWSA Managing Member Sam Cho.

“Ports operate in a global network and partnerships, such as the one between The Northwest Seaport Alliance and the Busan Port Authority, will be critical to driving decarbonisation efforts across the globe.”

Other world leaders in attendance at the Green Shipping Challenge Initiative launch included the Prime Ministers of Norway, Spain and Special Climate Envoys from South Korea, France, United Kingdom, Germany, Netherlands, Canada, and Singapore among many others.

Yesterday the Maritime and Port Authority of Singapore (MPA), Port of Long Beach, Port of Los Angeles, and C40 Cities announced plans to launch a green and digital shipping corridor between Singapore and the San Pedro Bay port complex.