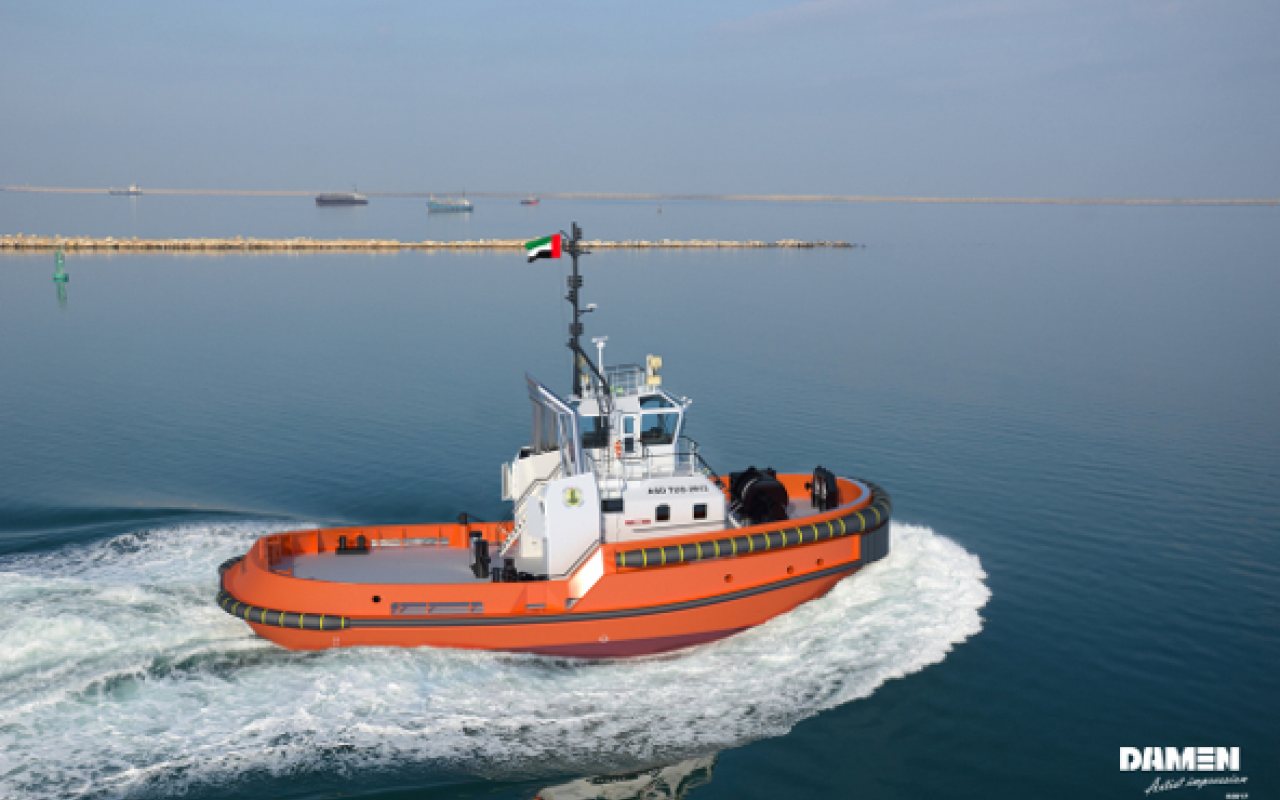 Saqr Port, part of Rash Al Khaimah (RAK) Ports, has signed a contract with the Damen Shipyards Group for a tug to be delivered in time for the opening of the new bulk terminal in mid-2018.

The ASD 2913 tug will be built a short distance away at Albwardy Damen in Sharjah.

Saqr Port is the major bulk-handing port in the Middle East and a vital part of the regional economy.

Located at the foot of the Hajar Mountains, it serves the fast-growing quarry industry in the emirate of Ras Al Khaimah. Each year 55 million tonnes of bulk materials are exported through the port to countries around the Arabian Gulf, and RAK Ports are currently adding new deepwater berths capable of handling capesize vessels.

Damen stated: “[Saqr Port] needed a vessel that is both compact and powerful, so as to be able to handle the large carriers at the new terminal and work within the confines of the harbour.

“At the same time, the proximity of the Hajar Mountains means that the port can experience sudden and very strong winds.

“The ASD 2913 was ultimately selected due to its having all the necessary attributes, including 80 tonnes of bollard pull within a 29-metre hull, plus high freeboard and a raised quarterdeck for safe operations in rough seas.”

The contract was signed at the beginning of April by Capt. Cliff Brand, Group General Manager, and Mr. Kommer Damen, in recognition of RAK Ports’ valued status as a long-standing customer of the Damen Shipyards Group.

Pascal Slingerland, Sales Manager Middle East for Damen, said: “We are delighted to be building for the UAE, in the UAE. Albwardy Damen continues to go from strength-to-strength, providing a comprehensive newbuild and repair service to the UAE and the wider Arabian Gulf, and it is our pleasure to be working with our near-neighbours at Saqr Port.”

Captain Michael Magee, Harbour Master at RAK Ports commented that “the port is delighted to have agreed a deal with Damen to build the 2913 locally.

“Damen’s proven quality product and their flexibility, with respect to build location, secured them the contract.

“The 2913 with 80 tonnes bollard pull will complement the seven tugs currently at Saqr Port, and give additional power to receive Capesize vessels.”