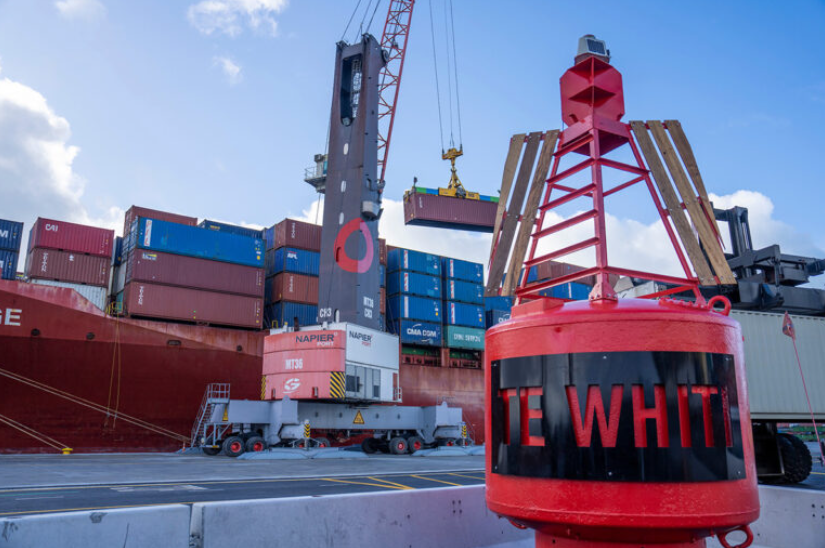 An opening ceremony took place on 22 July on the wharf itself, following a dawn karakia blessing to unveil the new formal wharf name – Te Whiti.

After officially welcoming the 294-metre Tianjin Bridge container vessel alongside 6 Wharf during the afternoon, Chairman Alasdair MacLeod said Te Whiti is a crucial part of Napier Port’s future direction, strengthening the port’s operational agility and resilience, and delivering capacity to support the future growth of importers and exporters across the central and lower North Island.

“Today is the culmination of a more than seven-year journey to bring our new wharf to Napier Port and Hawke’s Bay,” continued MacLeod.

“After the success of Napier Port’s Initial Public Listing (IPO) back in 2019 to support funding investment in a new wharf, we committed to delivering against not only our financial goals but the social, environmental and governance objectives we share with our wider community and I am proud to say Napier Port and its people have delivered on these.

“The strong support we have received from the Hawke’s Bay community, iwi, investors and shareholders alike has also undoubtedly played a crucial role in helping us to successfully deliver this intergenerational asset for our region, and we look forward to continuing to strengthen these ties into the future,” said MacLeod.

At the ceremony Chief Executive Todd Dawson said he was delighted to not only be opening the new wharf almost six months ahead of schedule and on budget, but to do so by commissioning one of the country’s largest pieces of privately-funded transport infrastructure in a decade.

“New Zealand’s supply chain is the foundation of our economy and there has never been a greater need for an efficient, cost-effective, sustainable network than there is now,” said Dawson.

“6 Wharf’s commercially funded investment business model is a fantastic example of what can be done with the right support and vision to enable New Zealand to have the type of quality infrastructure required to support sustainable growth now – and for generations to come.”

In Fiscal Year 2021 for Napier Port total annual container volumes increased 2.9 per cent to 276k TEU from 268k TEU in the prior year.

Napier Port is connected to the rail and State Highway networks and a series of strategically-located inland ports, enabling a more efficient, coordinated flow of cargo across and in and out of New Zealand.