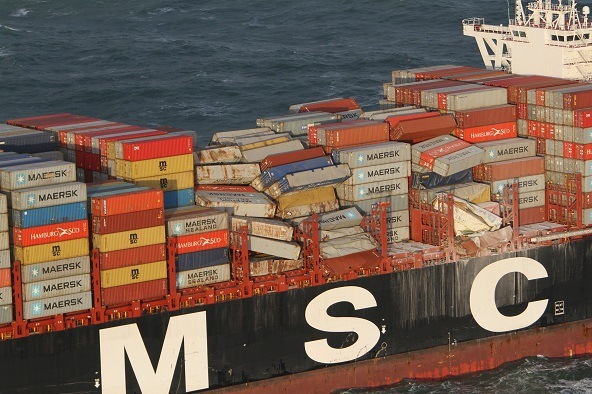 The Dutch Safety Board has revealed that the shipping routes above the Wadden Islands during northwestern storms form a risk for large, wide container ships.

This follows an investigation into the lessons learned from the loss of containers from the MSC Zoe in 2019.

The ship lost 342 containers and three million kilograms of cargo fell into the sea as a result of meeting severe weather on it journey through the Dutch Wadden Islands.

The investigation into the course of events has revealed that the MSC ZOE lost cargo at six locations.

The extreme forces acting on the ship, the containers and the lashing systems as a result of specific conditions on this shipping route were the primary cause of the loss of containers.

Above the Wadden Islands there are two internationally designated shipping routes, a northern and a southern route, explained the Dutch Safety Board in a report.

The investigation by the Dutch Safety Board has revealed that a combination of a number of phenomena means that on both the southern and northern shipping routes, there is a risk of loss of containers.

The investigation has resulted in various recommendations, the Board notes that minimizing the risks of container loss on the two shipping routes north of the Wadden Islands requires an integrated approach by the parties involved: the container shipping sector, the IMO and the Dutch government.

The first recommendation suggests that the Wadden states, including Germany and Denmark, take the initiative for a specific proposal to the IMO with measures for international container shipping to prevent the loss of containers on both shipping routes north of the Wadden Islands.

Second, the Minister of Infrastructure and Water Management should work to Inform shipping companies and masters of large container ships in a structural manner about the four hydrodynamic phenomena that emerged from the Board’s investigation, which can occur in the event of high beam seas on both shipping routes north of the Wadden Islands.

The need to grant the Netherlands Coastguard the tasks, authorities and resources it needs to monitor container ships so that ships can sail safely past the Wadden Islands in all wave and weather conditions was also highlighted. This includes establishing a VTS area.

Meanwhile, the Board also recommends that the Minister of Infrastructure and Water Management investigates the extent to which the route-specific risks of loss of containers can occur on different types of container ships and in different meteorological and maritime conditions.

Finally, it adds that there should be a periodic risk analysis of the route-specific risks that can lead to container loss on the shipping routes close to the Wadden Islands, with a view to the safety of shipping and protection of the North Sea and the Wadden area, and include this analysis as a fixed element of North Sea policy