In Pictures: The 5 Busiest Mediterranean Ports 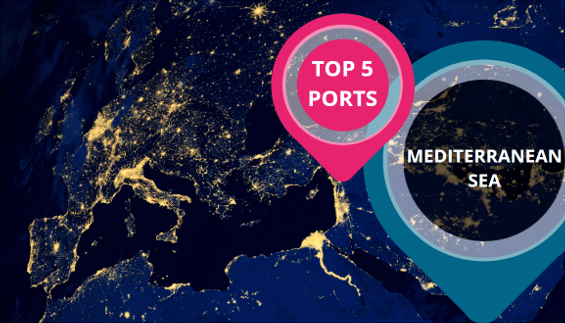 Europe has a diverse maritime environment and is home to some of the most technologically ambitious ports in the world and this got us thinking: what is the busiest Mediterranean port?

The Mediterranean Sea has been a critical maritime and commercial route for millennia.

Hemmed in between three continents, it was the lifeblood for many of antiquity’s most enduring civilizations and was a naval and merchant base for the modern world’s richest empires.

Today, it is home to 87 ports of various sizes and strengths serving local and international markets. However, we wanted to ask: what are the five busiest ports on the Mediterranean?

This list shows that it remains, as it always has been, a beacon of maritime innovation. It specifically container throughput and is accurate as of March 2019.

The Port of Valencia is the second largest port in Spain but handles more TEU than any other on the Mediterranean.
In 2018 it had a throughput of approximately 5.1 million TEU, making it the fifth busiest port in Europe.

It maintained its throughput in November 2019, when it once again exceeded five million TEUs. The figures also show that the US is the port’s biggest trading partner, a demonstration of its global reach.

Its plans for the short and long term are heavily concentrated on ‘green innovation’, which it explained in an exclusive interview to PTI at the 2019 Smart Digital Ports of the Future conference (SDP19).

The Port of Piraeus is the largest port in Greece and the sixth in Europe with a TEU throughput of 4.9 million.

Already a major Mediterranean port, it is currently going through a transformation thanks to Chinese state-owned shipping giant COSCO.

In October 2019 COSCO had a $672.9 million investment plan approved by Greece’s Committee of Planning and Development of Ports.

The plan for this investment is to turn Piraeus into a key part of Beijing’s Belt and Road Initiative (BRI) and ultimately China’s gateway into the Mediterranean.

The Port of Algeciras handled 4.7 million TEU in 2018, an increase on 2017 of 8.9%, making it is the third busiest port on the Mediterranean and seventh in Europe.

Its container operation revolves around being the staging point for shipping lines connecting Europe, Africa, the Americas and Asia, as well as being the Western Mediterranean’s maritime pulse.

In August 2019 Algeciras handled the MSC Gulsun, the biggest container ship in the world, during its maiden voyage.

It has continued to invest in port infrastructure in to order to consistently handle the biggest ships in the world, as well environmentally friendly technologies to cut waste.

In 2018 3.4 million TEU passed through the Port of Barcelona, making it the fourth busiest port on the Mediterranean and ninth in Europe.

It has made great efforts to improve its operations, including a 31% increase to its refrigerated container capacity. APM Terminals, its main terminal operator, announced an investment plan of $51.3 million to increase capacity.

Among its recent purchases are 29 straddle carriers and a fleet of Super Post-Panamax cranes, which are capable of handling ships with 23 containers across the beam to be loaded and unloaded.

In an interview at SDP19 Carles Rua, Port of Barcelona’s Chief Innovation Officer, spoke in detail about the port’s plans for 2020.

The Port of Marsaxlokk, or Malta Freeport, handled 3.3 million TEU in 2018, an increase of 5.1%, making it the fifth busiest port on the Mediterranean and 10th in Europe.

It was the first transhipment hub in the Mediterranean when it was established in 1988 and today continues to focus on its original expertise, with 96% of its traffic being in transhipments.

However, its growth has also seen it handle the latest fleet of megaships; in November 2019 the 20,954 TEU CMA CGM Jean Memoz became the largest vessel to ever call at Malta Freeport, demonstrating its status as another great Mediterranean maritime hub.